The Swimming Pool by Holly LeCraw 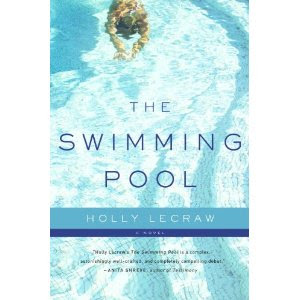 From GoodReads.com:  A heartbreaking affair, an unsolved murder, an explosive romance: welcome to summer on the Cape in this powerful debut.
Seven summers ago, Marcella Atkinson fell in love with Cecil McClatchey, a married father of two. But on the same night their romance abruptly ended, Cecil's wife was found murdered—and their lives changed forever. The case was never solved, and Cecil died soon after, an uncharged suspect.

Now divorced and estranged from her only daughter, Marcella lives alone, mired in grief and guilt. Meanwhile, Cecil's grown son, Jed, returns to the Cape with his sister for the first time in years. One day he finds a woman's bathing suit buried in a closet—a relic, unbeknownst to him, of his father's affair—and, on a hunch, confronts Marcella. When they fall into an affair of their own, their passion temporarily masks the pain of the past, but also leads to crises and revelations they never could have imagined.

In what is sure to be the debut of the season, The Swimming Pool delivers a sensuous narrative of such force and depth that you won't be able to put it down.

My Take:  I tried to like this book I really did.  But as is so often the case whenever everyone seems to LOVE a book I really just didn't get the whole thing.  Was the writing good? yeah  Was the story good?  Eh.  I could not find myself  liking any of the characters whatsoever.  I sympathized with Callie alittle bit but I really just wanted to slap her and tell her to grow up (although I know post partum depression is a real thing as I had it myself )  I just found her very whiny.  Jed, I felt was just trying to compete with his father in some way and I found Marcella the least likable person in the whole book.  I really found the whole lot of them a spoiled rich people who did whatever they wanted and didn't really care about who they hurt in the process.

As I said other have liked this book and it is not a book that I would tell anyone to run away screaming from but it definately wasn't my cup of tea.

I received a copy of the book from the publisher in exchange for an honest review.

Posted by detweilermom at 8:43 AM