The Wedding Chapel by Rachel Hauck. 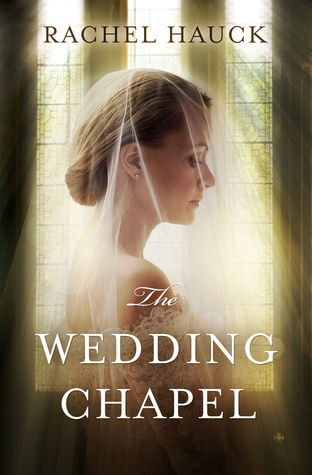 The Wedding Chapel (Zondervan, November 2015)
For sixty years, a wedding chapel sat silent, waiting for love. But times have changed and the hour has come when it just might be too late.
Retired hall-of-fame football coach Jimmy “Coach” Westbrook never imagined anything would come of his labor of love—the wedding chapel he built for Collette Greer, the woman he fell for back in ‘49. But now an offer has come to turn the chapel into what it was meant to be—a place for love—and Jimmy sees no reason to hang onto his dream any longer.
Photographer Taylor Branson is trying to make a life for herself in New York. Leaving her hometown of Heart’s Bend, Tennessee, she put a lot of things behind her, including her family’s abysmal marriage rate. But love surprises her when she falls head-over-heels for Jack Forester, a top ad man. Their whirlwind romance results in an elopement, and a mountain of doubt. Jack, while genuine in his love for Taylor, can never seem to overcome his own demons to find the words of his heart.
When Taylor takes an assignment in Heart’s Bend, the job does more than send her back to her hometown, but into a world of family secrets buried beneath the sands of time.
When Taylor’s journey intersects with Coach’s, they rediscover the heartbeat of their dreams and that the love they long to hold is right in front of them. And worth every waiting moment.

Rachel Hauck is an award-winning, best selling author of critically acclaimed novels such as "The Wedding Dress," "Love Starts with Elle," and "Once Upon A Prince." She also penned the Songbird Novels with multi-platinum recording artist, Sara Evans. Booklist named their novel, "Softly and Tenderly," one of 2011 Top Ten Inspirationals. She serves on the Executive Board for American Christian Fiction Writers and is a mentor and book therapist at My Book Therapy, and conference speaker. Rachel lives in central Florida with her husband and pets.

My Take: This story is told from several different points of view and unlike other books that I have read you do not become more involved in one story line over these others but you are equally invested in all four.  This also is told from the past and the present , the past being in 1949 and in 2015.  This story kinda of hit home a bit as one couple in the book got married quickly after a whirlwind romance and my daughter had a similar story but unfortunately her husband decided not to fight for their marriage and she became divorced yesterday, this couple decided to fight.  Not everything was clean cut and everything was fine but it made for a good story.

I received a review copy of this book for my honest review.
Posted by detweilermom at 4:45 PM No comments:

Not a Drop to Drink by Mindy McGinnis

Regret was for people with nothing to defend, people who had no water.

Lynn knows every threat to her pond: drought, a snowless winter, coyotes, and, most importantly, people looking for a drink. She makes sure anyone who comes near the pond leaves thirsty, or doesn't leave at all.

Confident in her own abilities, Lynn has no use for the world beyond the nearby fields and forest. Having a life means dedicating it to survival, and the constant work of gathering wood and water. Having a pond requires the fortitude to protect it, something Mother taught her well during their quiet hours on the rooftop, rifles in hand.

But wisps of smoke on the horizon mean one thing: strangers. The mysterious footprints by the pond, nighttime threats, and gunshots make it all too clear Lynn has exactly what they want, and they won’t stop until they get it….

With evocative, spare language and incredible drama, danger, and romance, debut author Mindy McGinnis depicts one girl’s journey in a barren world not so different than our own.


My Take:  I really enjoyed this book.  It was a little bit of a different take on a dystopian  take on the future.  Water is scarce and Lynn's Mom teaches her that she needs to protect their pond no matter what.  You shoot whoever comes near without asking questions.  After Lynn's Mom dies she meets some other people who teach her to have a bit more compassion to  a point until some savage men come and decide to take whatever they want including people.  The ending was satisfying and I look forward to reading the next novel in the series.

I read this book on my Kindle from my personal book collection.
Posted by detweilermom at 3:07 PM No comments: