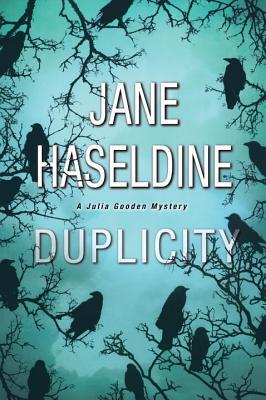 From Goodreads.com :In Jane Haseldine's new novel of riveting suspense, Detroit newspaper reporter Julia Gooden is up against the city's most devious criminal--and her own painful past.
Julia Gooden knows how to juggle different lives. A successful crime reporter, she covers the grittiest stories in the city while raising her two young boys in the suburbs. But beneath that accomplished facade is another Julia, still consumed by a tragedy that unfolded thirty years ago when her nine-year-old brother disappeared without a trace. Julia's marriage, too, is a balancing act, as she tries to rekindle her relationship with her husband, Assistant District Attorney David Tanner, while maintaining professional boundaries. David is about to bring Nick Rossi to trial for crimes that include drug trafficking, illegal gambling, and bribery. But the story becomes much more urgent when a courthouse bomb claims several victims--including the prosecution's key witness--and leaves David critically injured. Though Julia is certain that Rossi orchestrated the attack, the case against him is collapsing, and his power and connections run high and wide. With the help of Detective Raymond Navarro of the Detroit PD, she starts following a trail of blackmail, payback, and political ambition, little imagining where it will lead. Julia has risked her career before, but this time innocent lives--including her children's--hang in the balance, and justice may come too late to save what truly matters...

My Take: This Book is the second in a series but it can be read as a stand alone.  I really enjoyed this book and will be looking for the next installment of the series. The main character Julia is a crime reporter who is trying to do her job but also keep up with her marriage.  Her husband is and Assistant District Attorney and he is prosecuting  Nick Rossi.  Just when the main witness is coming into the courthouse a bomb goes off in the courthouse.  Julia's husband is injured also.  She feels she needs to prove who the bomber was and bring him justice but other's in her family may been collateral damage.  There is alot of action and twists and turns.  That is just the way I like my mysteries.

I received a review copy of this book from Partners in Crime in exchange for my honest review.
Posted by detweilermom at 4:32 PM No comments:

His Guilt by Shelley Shepard Grey

{MORE ABOUT HIS GUILT}

His Guilt: The Amish of Hart County (Avon Inspire, July 2017)
A suspenseful tale of an Amish man who will risk all to protect the woman he loves
Mark Fisher has returned home to Hart County, determined to put the past behind him. Two years ago, after being wrongly accused of assault, he left the Amish community, though never forgot his home. When the one person who had helped him through his rough times asks for help, Mark returns. But it is pretty Waneta Cain who makes him want to stay…
Neeta is one of the few people in Hart County who doesn’t believe Mark is guilty of hurting anyone. However, his worldliness and tough exterior do make her uneasy. As she begins to see the real man behind all the gossip and prejudice, she wonders if he is the man for her.
Just when Mark starts to believe a new life is possible, a close friend of Neeta’s is attacked. Once again, everyone in the community seems to believe he is guilty. But what hurts most is Neeta’s sudden wariness around him. When another woman is hurt, a woman who is close to both Neeta and himself, Mark fears he knows the real culprit. And time is running out. Will Mark be able to find him before Neeta becomes his next victim?
Learn more and purchase a copy.

Shelley Shepard Gray is a “New York Times” and “USA Today” bestselling author, a finalist for the American Christian Fiction Writers prestigious Carol Award, and a two-time HOLT Medallion winner. She lives in southern Ohio, where she writes full-time, bakes too much, and can often be found walking her dachshunds on her town’s bike trail.
Find out more about Shelley at http://www.shelleyshepardgray.com.

My Take:  This book is the second in a series but it definitely can be read alone. This book is about believing in someone even when events seem stacked against them.  Mark is accused of an attack on a local woman.  He is cleared but not before the damage is done to his reputation.  Seems as if most people in the Amish community believe he was guilty.  So he moves away until his parents die and he inherits the family home.  There are really nothing but bad memories there but he is determined to remodel the house and make it a home.  He gets a job at the local nursery where the owner believes in his innocence.  There he starts to work with Waneta who has misgivings at first but decides to give him the benefit of the doubt and starts to get to know him.  Things start to get scary when there are attacks on other women and people believe that Mark is responsible.  This book was good as it kept me guessing and had me wondering if Mark really was the culprit.  A good clean mysery/suspense book.

I received a review copy of this book from Litfuse in exchange for my honest opinion.
Posted by detweilermom at 11:58 AM No comments:

The Captain's Daughter by Jennifer Delamere

The Captain’s Daughter(Bethany House, June 2017)
Warm-hearted Victorian romance brings 1880s London to life.
When a series of circumstances beyond her control leave Rosalyn Bernay alone and penniless in London, she chances upon a job backstage at a theater that is presenting the most popular show in London. A talented musician and singer, she feels immediately at home and soon becomes enthralled with the idea of pursuing a career on the stage.
A hand injury during a skirmish in India has forced Nate Moran out of the army until he recovers. Filling his time at a stable of horses for hire in London, he has also spent the past two months working nights as a stagehand, filling in for his injured brother. Although he’s glad he can help his family through a tough time, he is counting the days until he can rejoin his regiment. London holds bitter memories for him that he is anxious to escape. But then he meets the beautiful woman who has found a new lease on life in the very place Nate can’t wait to leave behind.
Learn more and purchase a copy.

Jennifer Delamere’s debut Victorian romance, “An Heiress at Heart,” was a 2013 RITA award finalist in the inspirational category. Her follow-up novel, “A Lady Most Lovely,” received a starred review from “Publishers Weekly” and the Maggie Award for Excellence from Georgia Romance Writers. Jennifer earned a BA in English from McGill University in Montreal, where she became fluent in French and developed an abiding passion for winter sports. She’s been an editor of nonfiction and educational materials for nearly two decades, and lives in North Carolina with her husband.
Find out more about Jennifer at http://www.jenniferdelamere.com.

My take: This book is the first book in a new series by this author.  This is the first book I have read by this author.  I enjoyed this book fairly well as there were new to me things mentioned.  I enjoyed how the theater was brought in as a background and how Gilbert and Sullivan were in the book.  As always I found it fascinating how life during this time period was so brutal and how women were treated as less than property.  I found the scene at the train station interesting as Rosalyn was targeted by two people because she wasn't savy in the ways of the city.  I look forward to the next book in this series.

Posted by detweilermom at 2:51 PM No comments: