A Nick of Time by Mike DiCerto 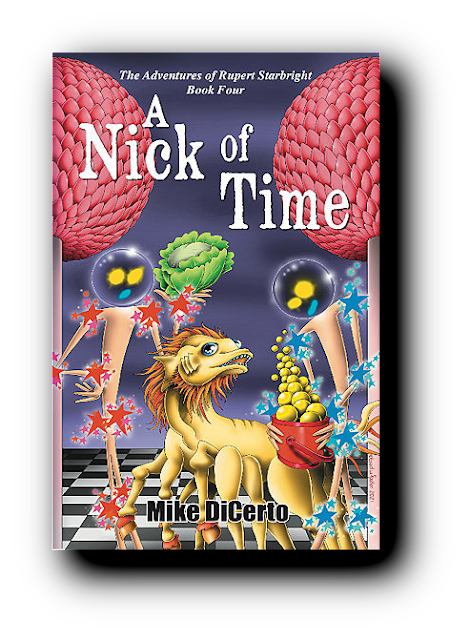 It’s New Year’s Eve in Graysland, but when the final second fails to come Rupert Starbright finds his entire town frozen in time. Rupert and his school crush Rainn Evertree must travel to the Land of Annum to retrieve the stolen second from the nasty and evil Epoch. They will explore a wild, imaginative, and musical world where all the characters of the Zodiac join Rainn in helping Rupert in his most colorful and challenging adventure yet!

“A Nick of Time is thoroughly entertaining and a fun read, this should be made into a Pixar animation!” – Amazon

“All kids should be encouraged to read this unique series and use their imaginings as well! It’s the power of positive thinking for the young adult set. Highly recommend!” – Amazon 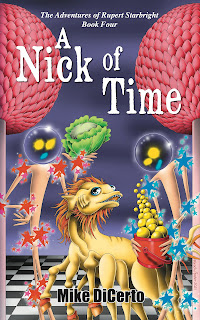 What felt like two sharp knives dug into Rupert’s shoulder—

something was trying to hold him under the suffocating

mud. He reached up blindly but grabbed only handfuls

of wet, mushy soil and grass. Another vicelike grip

grabbed his opposite shoulder, and he wanted to scream

to scare his attacker off.

Then he felt his body rise up, and cool air washed across

his muddy face. Higher he was lifted, until with a loud, slurping

sound his body was free. He was held in the grip by a

being in full shining black armor. Its face was like an insect’s,

but with blue-green glowing eyes.

Rupert screamed and kicked and punched. The being

was strong, and placed him firmly atop a dry, stony island

in the swamp; then stepped away from Rupert’s flailing fists

Rupert wiped mud off his face and glared at the dark

“Relax, my friend,” the being said in a female voice.

“A friend. Not sure why you fought me. I was trying

Rupert took a better look at her. It was not armor after

all—she was covered in a thick skin of polished black. She

had a wicked-looking segmented tail that curved behind her

and ended with a dangerous spiked tip. Her face was, indeed,

like an insect’s, but her eyes were a beautiful teal color

that cast a lovely glow. Her shining eyes, though, weren’t

enough to explain the bright pool of yellow light that surrounded

There was a soft buzz. Rupert looked up and was surprised

to find two giant fireflies hovering. They were huge!

The size of a horse or cow. Their large crystalline wings vibrated

and sent ripples of breeze across his face.

“Thank you,” he said, confused and embarrassed.

“That was a close call. My name is Scorpio,” she said,

holding out one of her six armored limbs. Rupert shook it

“My name is Rupert. I thought you were trying—“

“Do not worry yourself,” she interrupted. “You are one

feisty anomaly. I like that. However, I am confused why you

are here, although not as confused as I am to why I am.”

“These are the Marshes of May. I rule October. I was

following a hallow across the Octagon Jungle when, just

like that…“ Scorpio snapped her three fingers. “…I found

“That creepy specter that scared the stuffing out of you.

They infest October. They are what make Hallow’s Eve so

special. So scary. They are harmless. I find them fascinating.”

“It must be because of Epoch,” Rupert said.

“Epoch. He stole the last second before the new year

in my town. Everybody is stuck. Frozen. I came here with

my friend to get the stolen second back.”

“A stolen second? That is a first for me. That would explain

it, though. Time is a complicated puzzle. One missing

jig, and the whole calendar can get jaggy!”

“I know,” Rupert agreed. “Crazy things have been happening.”

Scorpio wiped a wad of mud off Rupert’s cheek with

a gentle flick of her claw. She smiled at him.

“You are a tough bird. I guess you were heading into

Rupert shrugged. “I don’t know its name, but yeah. That

line of trees. I thought I could camp until the light came

“Good idea! I have always wanted to see the Mayflower

Forest in person. Though it may be full of hallows from October.

Are you brave enough to come with me and see?”

“I did. Trouble is, many people are frightened of harmless

things. But I can see you are not. You have young wisdom!”

“October is full of scary hallows! But folks fear things

all year long. Listen…“ Scorpio stepped back, cleared her

throat and began to sing:

When a person meets a hallow

One of two things will occur

They will curse the ground it walks on

Or they’ll vanish in a blur.

On a quiet road at night

And they turn and run, forgetting

Shadows live because of light!

Or say a hairy squibblebob

Appears outside your door,

With horrid teeth and claws and such

To scare ya even more,

Don’t judge a hairy squibblebob by

The cover of its book

Deeper down inside its heart

Is where you have to look.

Don’t let the scary scare ya.

After all, what is the thunder

But best pals with the lightning!

Remember this, and this I say—

Never let the scary scare ya!

It’s an endless road to misery.

The greatest thing someone can feel

Is joy at all life’s mysteries!

And if indeed some bullywack

Comes ‘round to do you harm.

Just stand your ground—and trust me

Their own shadows that lie under

And lightning scares them just as much

As its good friend Ol’ Thunder.

Of the same dull dime.

This has been the truthful fact

Since before the dawn of time.

So, courage and clear thinking

Are what get you through your life,

And save your stomach from butterflies

Of nervousness and strife 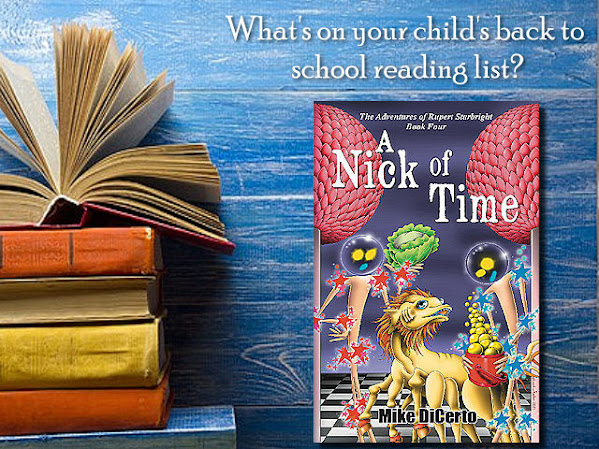 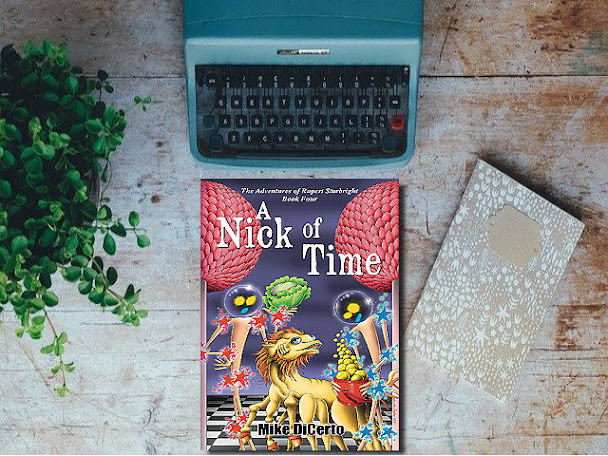 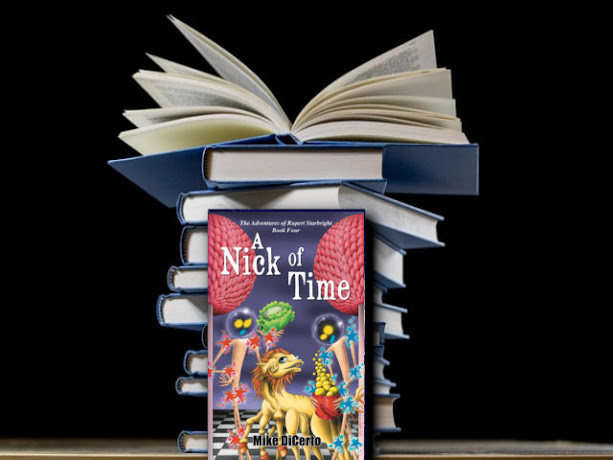 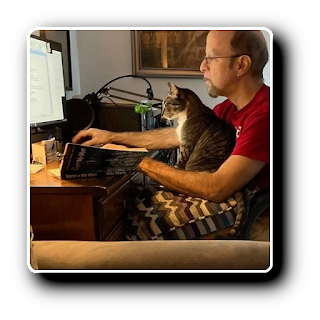 Since his childhood Mike Di Certo has always harvested his work from the abundant crop of his imagination. From the wild and hilarious Rock and Roll space adventure Milky Way Marmalade, to the child-like wonder of his middle grade series, The Adventures of Rupert Starbright (The Door to Far-Myst, The Secret of My-Myst and The Ghosts of Winter Joy) Michael's passions play out on the pages. His love of animals, his family, gardening, travel, movies, VR, history, Yoga, reading and music guide and influence his life and his writing.

His latest book is the middle grade fantasy novel, A Nick of Time. 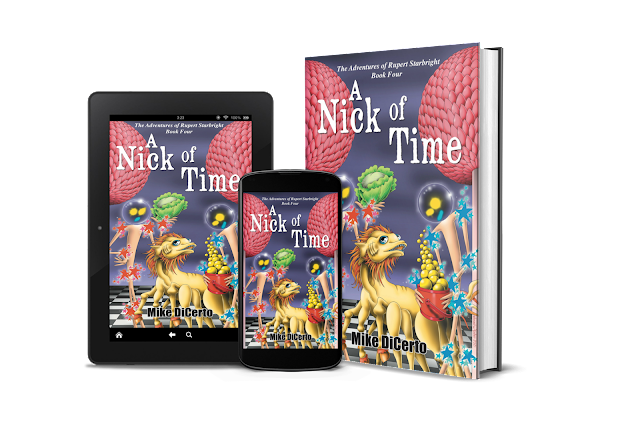 My Take: This is the Fourth book in this series. Although is would be helpful to read the first three books it is not necessary to enjoy this book but I think you will want to read the first three after reading this book I know I do. This is a really enjoyable book that I think early teens would enjoy. Rupert and Rainn must travel to a different world to recover the last minute of the New Year so that you can ahead and start the New Year. This gives Rupert and Rainn a chance to get to know each other. I found this book charming and very enjoyable and I will be giving it to my grandchildren to read. I received a reiew copy of this book from Pump Up Your Book Tours and was not required to write a positive review.
Posted by detweilermom at 6:00 AM No comments: