The Hope Jar by Wanda Brunstetter 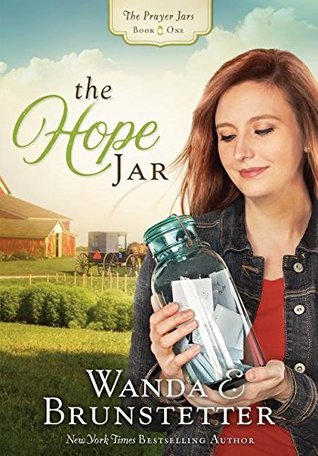 Michelle Taylor is not who her new family in Lancaster County believes her to be. The Lapps were looking for their long-lost granddaughter when they met Michelle and she assumed the identity of Sara Murray. Once homeless and hopeless, Michelle has come to love her new Amish friends and even considers the idea of romance among them.

Finding an old blue jar in the barn that is filled with slips of paper containing thoughts, quotes, and prayers by an unknown author becomes a boost to Michelle’s budding faith— but also convicting. How can she tell the truth without hurting the ones she has truly come to love?

My Take:  I have loved everything I have read by Wanda Brunstetter and this book is no exception. I really liked all the characters both the Amish ones and the Englishers. There is a major deception that happens and is continued throughout the whole book till the very end when the deceptor comes clean. I eagerly look forward to reading the next book in the series to see what happens with all the characters.

I received a review copy of this book from Amazon Vine and Barbour and was not required to write a positive review.
Posted by detweilermom at 1:19 PM No comments: Former Army helicopter pilot, Susan Turner is Selected as the next President of the United States. In order to avoid a nuclear war, she must overcome personal demons and learn to navigate the murky waters of international diplomacy.
Five years ago, the Dove Revolution changed the political structure of the United States. The President, Senate, and Congress are no longer elected by the public, they are Selected at random every two years. A shadow organization known only as The Board, advances their sinister agenda by taking advantage of their anonymity and Susan's tendency to make brash decisions. Blackmail, espionage and murder are all in play as The Board manipulates geo-political events to spark a war between the Soviet Union and the United States.
With the help of her former Squadron Commander, General LeMae, Susan Turner attempts to lead the nation through these turbulent times while battling her own internal demons. Susan is a battle-hardened war veteran but she must learn what it takes to be a world leader. Nuclear war and the future of the human race hang in the balance.

Susan Turner looked up through a haze of white dust and saw a group of men in black suits huddled around her body. The muffled ringing in her ears overpowered their voices. The men helped her to her feet and they ran as a group toward the entrance to the underground tunnel. Her hearing slowly returned, screams of panic in the hallway replacing the ringing. As they ran, she recognized the men surrounding her were Secret Service agents.
Four agents surrounded Susan as they jogged through the underground tunnel together. Ten yards into the tunnel, she slowed down. In mid-stride, she took off one heel at a time and returned to the pace of the group. There were no words exchanged; they moved together in focused silence. Four hundred yards down the tunnel, the group stopped at two large steel doors. The lead agent opened the doors and light from the helicopter pad above burst into the tunnel.
Before moving toward the helicopter, the agent stand- ing behind Susan shouted into his headset, “Checkpoint Bravo. Waiting for clearance.” He nodded as the response came through and relayed the message to the group: “Let’s move.” They ran from the tunnel into the daylight and across the tarmac to the open doors of the helicopter.
The agent sitting across from Susan handed her a com- munications headset. “Ma’am, are you okay? Any injuries?” Susan wiped the sweat and dust from her face. “No, I’m fine. My family?”
“They’re safe. Your children were brought to a safe location under the Pentagon, and your parents are there with them.”
She nodded. “Is it over?”
He pursed his lips before responding, “I don’t know. I only heard snippets of radio chatter while we were on the way to the helipad.”
Susan leaned back in her seat, cupping her hands over her face and replaying the events in her mind. The group stayed in radio silence for the remainder of the brief flight. The helicopter landed at Andrews Air Force Base and the doors immediately opened. Susan and her security detail rushed across the tarmac and boarded the Boeing 747. She walked onto the plane in her bare feet. Jogging on con- crete caused the pinky toe on her left foot to bleed. She left a trail of blood down the center aisle of Air Force One.
***
Excerpt from Selected by J. Allen Wolfrum. Copyright © 2018 by J. Allen Wolfrum. Reproduced with permission from J. Allen Wolfrum. All rights reserved. J. Allen Wolfrum is a fiction author and former Marine. He served four years as a Marine Corps Infantryman in the most decorated Regiment in Marine Corps history. During Operation Iraqi Freedom he led an infantry squad on missions spanning from the oil fields of Southern Iraq to the streets of Baghdad.
After the Marine Corps, he spent the next fifteen years exploring life from several perspectives: press operator in a plastics factory, warehouse stocker, confused college student, Certified Public Accountant, bearded graduate student, management consultant, and data analyst.
J. Allen Wolfrum’s writing career began in 2017 with his debut novel, Selected. He uses the unique combination of his Marine Corps, professional and life experience to create a realistic perspective on the political thriller genre. He lives in Southern California with his beautiful wife and two cats.

My Take:  I really enjoyed this book.  I like books that are set in the future and imagine how things might be.  This book takes how we chose our President and turns it on its head.  Presidents are now selected every two years and the previous President becomes the Vice President.  I liked how the story dealt with false news or fake news and shows how that can sway people's opinion.  Overall this was a very entertaining read and I enjoyed it very much.  I would give it a four out of five stars.

I received a review copy from Partners in Crime and was not required to write a positive review.

This is a rafflecopter giveaway hosted by Partners in Crime Virtual Book Tours for J. Allen Wolfrum. There will be 1 winner of one (1) Amazon.com Gift Card. The giveaway begins on July 1, 2018 and runs through September 1, 2018. Open to U.S. addresses only. Void where prohibited.

Posted by detweilermom at 12:52 PM No comments:

Appointment in Prague by Michael MCMenamin and Kathleen MCMenamin

Posted by detweilermom at 3:14 PM No comments:

Book Spotlight of The Other Woman by Sandie Jones

A deliciously disturbing, compulsively readable debut domestic suspense--prepare to meet The Other Woman: there’s nothing she won’t do to keep you away from her son ...Emily thinks Adam’s perfect; the man she thought she’d never meet. But lurking in the shadows is a rival; a woman who shares a deep bond with the man she loves.Emily chose Adam, but she didn’t choose his mother Pammie. There’s nothing a mother wouldn’t do for her son, and now Emily is about to find out just how far Pammie will go to get what she wants: Emily gone forever.The Other Woman is an addictive, fast-paced psychological thriller about the destructive relationship between Emily, her boyfriend Adam, and his manipulative mother Pammie.
Posted by detweilermom at 1:16 PM No comments:

Book Spotlight of The Fashion Designer by Nancy Moser 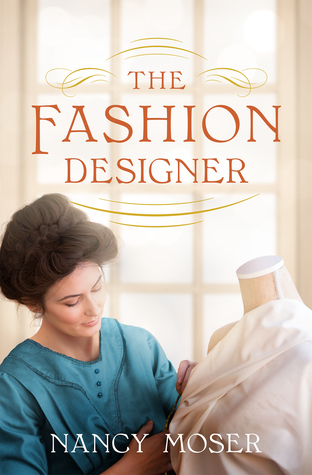 The American Dream thrives in 1912 New York City Annie Wood, the housemaid-turned-pattern designer in The Pattern Artist, jumps at the chance to design her own clothing line when a wealthy New York couple offer to finance her endeavor. Joining the project is Annie’s new husband, Sean Culver, her best friend at Butterick, Maude Nascato, and a mother figure, Edna Holmquist. Annie and her colleagues give up their careers, risking everything to follow a shared passion: clothes that are both fashionable and functional for modern, busy women in 1912. Personal and financial setbacks threaten to keep the business from ever selling a single dress and test old relationships and new romances. No one said it would be easy. But the promise of the American Dream holds a deep hope for those who work hard, trust God, and never give up.
Posted by detweilermom at 1:13 PM No comments: