A Brew To a Kill by Cleo Coyle, Narrated by Rebecca Gibel Audio Book Review


From Goodreads.comCoffee. It can get a girl killed.
A shocking hit-and-run in front of her Village Blend coffeehouse spurs Clare Cosi into action. A divorced, single mom in her forties, Clare is also a dedicated sleuth, and she's determined to track down this ruthless driver who ran down an innocent friend and customer. In the meantime, her ex-husband Matt, the shop's globetrotting coffee buyer, sources some amazing new beans from Brazil. But he soon discovers that he's importing more than coffee, and Clare may have been the real target of that deadly driver. Can ex-husband and wife work together to solve this mystery? Or will their newest brew lead to murder?

My Take:  I love Cozy Mysteries and I have been wanting to read this series by Cleo Coyle so when I saw this book available to review in audio I jumped at the chance to listen to it.   Even though this book 11 I did not feel lost at all with the book.  The author did an excellent job of  making sure that you knew who everyone was, maybe a little too much.  I thought that she referred to her ex-husband Matt as her ex-husband every time he was in the story ,  OK already we know that he is your ex-husband.  The same with her ex mother in law.   As far as the mystery goes I had my suspicions  as to who did it about mid way through the book but I didn't know for sure until they revealed it in the book.  I liked the whole food truck aspect of the book as I have just started watching the Food Truck Race on the Food Network.  It amazes me how they can work in such a small space and still produce great products.  There was a bit more language in this book than I usually like in cozies and a bit more sexual conduct but over all it was a good mystery.  Will I read any more in the series?  Not really sure at this point,  I have other series that I like that don't have the language and sex that fit more into my personal likes.

I received a review copy of this audio book for review purposes from the Publisher AudioGo , in exchange for my honest opinion without any expectation of a positive review.

Devourerofbooks.com  hosts a meme for audio book reviews on Fridays.  Head on over there to see if you can discover your next great listen.
Posted by detweilermom at 10:20 AM 1 comment:

First Chapter Peak of House of Mercy by Erin Healy

***Special thanks to Rick Roberson of The B&B Media Group for sending me a review copy.***

She began working with Ted Dekker in 2002 and edited twelve of his heart-pounding stories before their collaboration on Kiss, the first novel to seat her on "the other side of the desk."
Erin is the owner of WordWright Editorial Services, a consulting firm specializing in fiction book development. She is a member of the American Christian Fiction Writers and the Academy of Christian Editors. She lives with her family in Colorado. 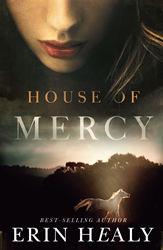 Beth has a gift of healing-which is why she wants to become a vet and help her family run their fifth-generation cattle ranch. Her father's dream of helping men in trouble and giving them a second chance is her dream too. But it only takes one foolish decision for Beth to destroy it all.

Beth scrambles to redeem her mistake, pleading with God for help, even as a mystery complicates her life. But the repercussions grow more unbearable-a lawsuit, a death, a divided family, and the looming loss of everything she cares about. Beth's only hope is to find the grandfather she never knew and beg for his help. Confused, grieving, but determined to make amends, she embarks on a horseback journey across the mountains, guided by a wild, unpredictable wolf who may or may not be real.

Set in the stunningly rugged terrain of Southern Colorado, House of Mercy follows Beth through the valley of the shadow of death into the unfathomable miracles of God's goodness and mercy.

Posted by detweilermom at 7:00 AM No comments:

***Special thanks to Ginger Chen of Harvest House Publishers for sending me a review copy.***

Arlene Pellicane is an author, speaker, and formerly served as the associate producer for Turning Point Television with Dr. David Jeremiah. Her audiobook and website Losing Weight After Baby has helped many moms achieve their physical and personal goals. Arlene and her family make their home in southern California. 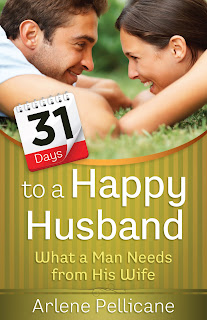 What does a man need most from his wife? Arlene Pellicane has identified five keys that will give wives a new appreciation and understanding of how to love and care for their mates along with practical instruction to motivate and equip wives to provide their husbands what they long for.

Like oysters, women often encounter unexpected grit during their everyday lives. In response, God’s love and grace covers this grit and transforms the pain into a precious pearl that leaves a layered, luminous lining within a shell: Mother of Pearl. This brilliant luster is strong, lasting, and purposeful — just like the love, lessons, and legacies left by the special women in our lives.
Mother of Pearl celebrates the collective iridescence of motherhood. Margaret McSweeney presents a collection of heartfelt vignettes from authors who communicate the importance of the unique relationships between mothers and their children, between granddaughters and grandmothers and between children and the mother-figures in their lives.
These stories tell of the power of faith, prayer, and values, exploring coming of age, the joy of becoming a mother, the importance of motherhood, the ways to heal from a bad relationship with a mother and weathering the death of a special loved one. Poignant and thought-provoking, the stories serve to inspire, encourage, instill hope, and strengthen faith.
The proceeds from the sale of Mother of Pearl will be donated to organizations helping struggling women and children. The charities include Wings (Women in Need Growing Stronger) to help fund the Safe House in the Chicago suburbs and to Hands of Hope to help build wells for schoolchildren in Zambia.

Margaret McSweeney is a well-published author often writing online articles for Make It Better (the former North Shore Magazine) and freelance articles for the Daily Herald, the largest suburban Chicago newspaper. In addition, she has authored and compiled several books including A Mother’s Heart Knows; Go Back and Be Happy; Pearl Girls: Encountering Grit, Experiencing Grace and most recently, Mother of Pearl. Margaret has a master’s degree from the University of South Carolina in international business. As is the founder of Pearl Girls, Margaret collaborates with other writers on projects to help fund a safe house for WINGS, an organization that helps women and their children who are victims ofdomestic violence, and to build wells for schoolchildren in Uganda through Hands of Hope. For the past 10 years she has served on the board of directors and leadership advisory board for WINGS. Margaret lives with her husband and 2 daughters in the Chicago suburbs.

My Take:  These are very uplifting stories be they humorous or serious.  No matter what season of your life you will find inspiration from this book of stories about life.  Each story is just a few pages long and can be read as a devotional or just read in quick snippets when you have a few moments to spare in your day (lets face in todays day and age that is sometimes all you have.)  Each story starts with a scripture verse that fits the story and there is a short bio of the author at the end.  Some of the ladies I have read before and some I haven't  but will be looking for them.  A great little book to remind us that it takes friction to produce a pearl just like the friction in our lives helps us grow and wonderful things usually comes from it.

I received a review copy of this book from Litfuse.


To celebrate the release of Mother of Pearl: Luminous Lessons and Iridescent Faith I'm hosting an evening of chat, laughter, and encouragement on Facebook! I’ve invited the Pearl Girl contributors to join us on the evening of September 4th. I’d be so honored if you’d come too! We’ll be giving away a ton of fun stuff {books, gift certificates and a Beautiful Pearl Necklace set}. Mother of Pearl celebrates the collective iridescence of motherhood. We’ll gather to connect, be encouraged and make some new friends! So RSVP today and then come back on September 4th (at 5pm Pacific, 6pm Mountain, 7pm Central, and 8pm Eastern) and join us for the “Pearl” party. Let’s share our stories and encourage one another. We’ll also have an update from the charities involved with Pearl Girls, Wings and Hands of Hope. (See what others are saying about Mother of Pearl.)

Posted by detweilermom at 3:57 PM No comments: