The Second Ship by Richard Phillips 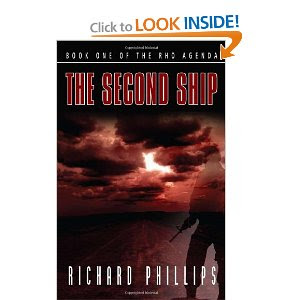 From Goodread.com:  On the evening of July 3rd, 1947, two starships battled in the night sky over the American Southwest, sending both ships crashing into the high desert. One of these ships was quickly discovered near Roswell, New Mexico, and spirited away, its existence officially denied by the US Government. In August of 2006, three high school students accidentally discover something which leaves them entangled in a dark web of international espionage and intrigue. Pursued by government agents and mercenary killers, they stumble upon something far more terrifying. Now, their only hope of survival may lie within The Second Ship.
My Take:  What a rollercoaster ride of a book!!.  I really liked this book, it grabbed you with the first page and never let go.
When the government decides to start releasing the technology that has been found on the ship the whole would is excited.  The first technology to be released is cold fusion.  Is this a good thing or the beginning of something else?
Heather and her friends,twins, Mark and Jen find a second ship out in the desert and enter it.  what they find changes their life drastically and they have to keep it secret for now.
This is a great book and I think anyone who reads it will enjoy the mystery and thrill of the ride.
Posted by detweilermom at 9:42 AM