Seeds of Summer by Deborah Vogts

It is time for a FIRST Wild Card Tour book review! If you wish to join the FIRST blog alliance, just click the button (In the sidebar). We are a group of reviewers who tour Christian books. A Wild Card post includes a brief bio of the author and a full chapter from each book toured. The reason it is called a FIRST Wild Card Tour is that you never know if the book will be fiction, non~fiction, for young, or for old...or for somewhere in between! Enjoy your free peek into the book!


You never know when I might play a wild card on you! 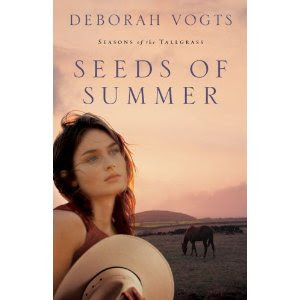 ***Special thanks to Londa Alderink of Zondervan for sending me a review copy.***

Deborah Vogts and her husband have three daughters and make their home in Southeast Kansas where they raise and train American Quarter Horses. As a student at Emporia State University studying English and journalism, Deborah developed a love for the Flint Hills that has never faded. In writing this series, she hopes to share her passion for one of the last tallgrass prairie regions in the world, showing that God’s great beauty rests on the prairie and in the hearts of those who live there. 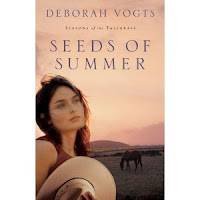 Metal scraped against metal, waking Natalie from a restless sleep. Again, the screech came from outside. With a reluctant groan, she forced herself from her cotton sheets and fumbled in the dark to find her boots.

What was out there? And why wasn't Jessie barking?

She slipped her bare feet into leather ropers, then hurried from the bedroom down the stairs, hoping she wouldn't rouse her younger siblings. An instant foreboding caused her to grab the shotgun her dad always kept behind the back door. Natalie loaded it with a couple of shells before heading to the porch -- just in case. As her eyes adjusted to the outside darkness, she distinguished the faint outline of a truck backed up to the barn entrance. She crept through the barnyard.

“Who's there?” Her voice wavered as she clutched the wooden forearm of the aged Winchester, prepared to fire a warning shot at the moon if necessary.

A small beam of light darted inside the old limestone barn, then disappeared.

“Tom, is that you?” Natalie eased her finger closer to the trigger.

Silence. Then the hollow clamor of feed buckets knocked to the ground as though someone had tripped over them.

Natalie held her breath. Her heart thumped wildly against her chest as she thought about the recent thefts in the county. If only her dad were here.

But he's not, and you're in charge. Slow, mechanical breaths helped her to see this might be nothing more than their hired hand returning from a night at the bar. She knew little about Tom Walker, but the idea that he'd been out with friends on a Friday night was more probable than not.

A tall figure edged from the shadows. Natalie recognized the pale shock of curls highlighted by the luminous night.

“Hey there, don't shoot.” The ranch employee rested his hands on his head. “I was only putting some stuff away in the barn.”

“Working kind of late, aren't you?”

“Just got back from a rodeo.” Tom's voice grew louder as he approached. “Sorry if I frightened you.”

Natalie lowered the shotgun, then gazed up at the sky, relief lodged in her throat. “You could've turned on the barn lights. At least then I wouldn't have thought someone was sneaking around out here.”

“Didn't want to wake the house.”

In the faint moonlight, she caught the glint of an uneasy smile on the man's face. “How'd you do?”

Natalie knew all about rodeo and tough nights. “There'll be others.”

He dropped his arms, and she noticed Jessie at his side. No wonder the faithful border collie hadn't barked. Suddenly aware of how she must look, she combed her fingers through her wayward locks. Dressed in baggy shorts, a torn T-shirt, and a pair of pink boots, she held little resemblance to her former title as Miss Rodeo Kansas, or of a rancher either.

And that's what she was now -- a twenty-two-year-old ranch owner in the Flint Hills of Charris County, Kansas. She shook her head, confounded by the turn of events her life had taken in the past week. “Well, I'm sorry for interrupting your work. I'll let you get back to your business.” Hoping he wouldn't sense her despair, she turned toward the house. As she did, an engine revved in the near distance. Tracing the noise, she saw a truck tear from behind the barn, its headlights aimed for the lane.

Staggering backward, she almost dropped her father's shotgun but somehow managed to bring the wooden stock to her shoulder. “Hey, you there,” she called out. “Stop or I'll shoot.”

The truck vaulted onto the dirt road and spun gravel as it sped away. Speechless, Natalie lowered the gun and whirled toward the hired hand, expecting him to go after the culprits sneaking around her father's barn.

Then she acknowledged the panic in the man's eyes.

“What were you and your buddies doing in there?” Her brows crinkled, and she instantly thought the worst. Dark barn, suspicious behavior. Had they been doing drugs, or were they stealing?

“It's not what you think.” The hostility in the air pricked her skin as the man stepped closer. He stood a half-foot taller than her own five-foot-eight.

Natalie gripped the shotgun, her palms damp with sweat. Did she have the guts to shoot a man? She aimed the barrel at his chest. “Is this how you're going to honor my father? By stealing from him? He's not been dead a week.”

“The boys and I --we were just having some fun --talking was all.” His gentle voice caressed her.

Natalie recognized the seduction of his lie --the flicker of deceit in his eyes. “In the dark?”

“No law against talking in the dark.” He reached in her direction, much too close for her comfort.

She shoved his lanky body back with the metal barrel and thought of all the work they needed to accomplish the next day unloading and sorting cattle. Could she and the kids get along without his help if she fired him? Could she trust him to tell the truth?

His lips pulled into a pout. “Come on, Miss Adams. I've been with your dad for nearly six months. He trusted me. We weren't doing nothing wrong ... honest.”

Natalie searched the man's eyes for a hint of sincerity. “Swear on your mama's grave?” Even as the words came from her mouth, she knew she was a fool to trust him.

Natalie's throat swelled as hot tears threatened to fall. Her good judgment now clouded with grief, she eased the barrel toward the ground and shook her head in embarrassment. “I guess the stress is getting to me. Sorry for being so jumpy.”

Tom nodded in understanding. “No need to apologize. A person can't be too careful these days -- especially a young woman like yourself. It's good I'm around for protection.”

Natalie disregarded his remark, finding no comfort in it. Her gut twisted at the vulnerable position her father's death had placed her in as Tom drifted back to the darkness of the barn. With a weary sigh, she studied the moon above. Like a shooting star, her life had changed in an instant and no matter how much she wished it, not even the crickets or the moaning bullfrogs could set it right again.

Returning to the house, she peeked in on her twelve-year-old brother, asleep in his upstairs bedroom. His tranquil face reflected no worries, no hint of strain from their recent ordeal.

Oh, that her rest could be as peaceful.

When Natalie opened the door to her sister's bedroom, she failed to make out a form under the covers. A flick of the light revealed Chelsey's bed hadn't been slept in. She glanced about the room, and then noticed the splay of curtains caught in a warm breeze from the open dormer window. Natalie darted back to Dillon's room.

“Where's Chelsey?” She jiggled her brother's leg and watched the young boy rouse from a deep sleep.

Dillon rubbed his eyes and sat up in bed. “What?”

“Chelsey's not in her room. Do you have any idea where she might be? Out with friends? A party somewhere?”

Her brother shook his head, then yawned. “I heard her talking on the phone to Lucas earlier. Maybe she's with him.”

Natalie's mouth grew taut. Nothing good ever happened past midnight, and it was now close to two. She hoped the reckless teenagers weren't in a ditch somewhere.

A loud thump from Chelsey's room caused those thoughts to evaporate.

Natalie rounded the hallway to find her fifteen-year-old sister crumpled on the bedroom floor.

Chelsey raised her head, her eyes glazed. “Hey, sis.” Her words came out slurred as she tried to stand. “Did ya miss me?”

My Take:
I found this book very enjoyable.  The family wasn't perfect as they were struggling with the recent death of their father and they each were having a hard time.  I found Jared character  very refreshing and I liked that he tried to give everyone the benefit of the doubt.  I would say that I would give it a 4 out of five stars.  It is part of a series and I will be looking for the others.

If you like Christian Romance but with a little bit different take this is a good book for you.

Posted by detweilermom at 9:03 AM