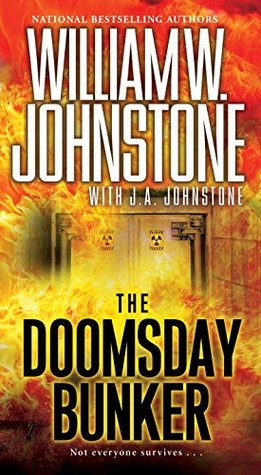 from Goodreads.com: From the bestselling authors of Black Friday, Tyranny, and Stand Your Ground comes a shattering novel of the last days of civilization and the final battle for humanity . . .
DON T OPEN TILL DOOMSDAYSix weeks ago, former US Marine Patrick Larkin purchased shares in a massive high-tech, state of the art underground missile silo for his family. It was a decision based on easing his wildest, most unimaginable nuclear fears. But then reality strikes with devastating suddenness, razing cities in a searing flash across the nation, all of it witnessed by terrified Americans on TV and the Internet. No one knows who pulled the trigger. No one knows if the last day on Earth will ever end. But Larkin and his family are the lucky ones or so they think . . . Holed up in their fortified sanctuary, with a maximum capacity of three hundred people, the bunker is pushed to its limits and so are the people locked inside. Tensions rise. Panic erupts. Outside, armed marauders surround the bunker and they want in. Larkin has to convince the others they must work together as a team to survive. And they must kill without mercy to stay alive . . . MAYBE THE DEAD ARE REALLY THE LUCKY ONES . . . ."

My Take: This was a very interesting read.  It started out with things sounding very much like they are today.  Then the main character hears about this man who is retrofitting an old missile silo for a safe place for people to go if nuclear war occurs.  the cost is very high and not many people can fit in the silo.  He talks his wife and his daughter and her husband into buying shares.  Then the action really kicks up when nuclear war does occur and they have to get to the bunker.  The story continues from there with alot of the good in people and the bad in people display themselves in what transpires in the bunker in the days, weeks, months after the war.  I really enjoyed this book and stayed up late to finish it.

I received a review copy from Amazon Vine in exchange for my honest opinion.
Posted by detweilermom at 8:00 AM