Book spotlight of The Alchemist Agenda by Marty Weiss 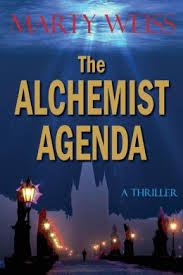 ABOUT THE ALCHEMIST AGENDA

When Charlie Rocklin and his company Gold Diggers Exploration set out to recover a 17th century shipwreck, they discover an undocumented Nazi submarine with enigmatic symbols. Ariel Ellis, a femme fatale historian with a mysterious past, proves that the U-boat contains the key to a formula more valuable than any sunken treasure, and more deadly than any weapon that has ever existed. In this globetrotting international adventure, Charlie and Ariel uncover an accelerating tempest of secrecy, lies, and agendas, fighting not only for the truth, but for their lives. Weiss's debut novel is a lightning-paced story with surprises at every turn, and shows us that our personal legends may be more real than we ever could have imagined. Purchase at:

Marty Weiss was born and raised in Chicago and decided that he wanted to make movies after spending a summer working on the set of John Hughes' movie "Sixteen Candles." After earning a B.S. in Journalism from the University of Illinois, Champaign-Urbana, and an M.F.A. in film and television from New York University, he directed national and international TV commercials for major Blue Chip brands as well as TV movies. He helmed his first feature film, "Vampires: The Turning," for Sony/Screen Gems Entertainment - an action/horror movie that evolved out of John Carpenter's "Vampires." It was filmed in Chiang Mai, Thailand and released worldwide in 2005. Weiss has filmed throughout North and South America, Eastern and Western Europe, and Southeast Asia, and has garnered numerous industry awards. His screen adaption of his debut novel, "The Alchemist Agenda," was the honored with the Best Screenplay award from Amazon Studios and is currently on their development slate for production. Weiss lives in Los Angeles with his wife Elisabeth and children Jasmine and Jake. Visit his blog at http://www.martinishotfilms.tv

Posted by detweilermom at 6:31 PM

Email ThisBlogThis!Share to TwitterShare to FacebookShare to Pinterest
Labels: Book Spotlight, Marty Weiss, pump up your book, The Alchemist Agenda