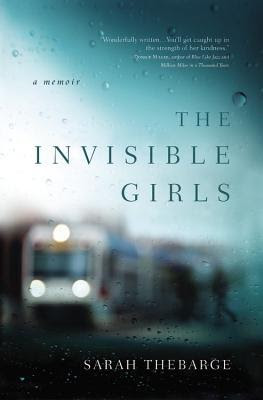 The Invisible Girls by Sarah Thebarge
Read by Kirsten Potter


A girl scarred by her past. A refugee mother uncertain of her future. Five little girls who brought them together.

After nearly dying of in her twenties, Sarah Thebarge fled her successful career, her Ivy League education, and a failed relationship on the East Coast and started over in Portland, Oregon. She was hoping to quietly pick up the pieces of her broken life, but instead she met Hadhi and her daughters, and set out on an adventure she’d never anticipated.

Hadhi was fighting battles of her own. A Somali refugee abandoned by her husband, she was struggling to raise five young daughters in a culture she didn’t understand. When their worlds collided, Hadhi and the girls were on the brink of starvation in their own home, “invisible” in a neighborhood of strangers. As Sarah helped Hadhi and the girls navigate American life, her outreach to the family became a source of courage and a for herself.

Poignant, and at times shattering, Sarah Thebarge’s riveting memoir invites listeners into her story, finding connection, love, and redemption in the most unexpected places.

My Take:  This was a very emotional book.  There was anger, sadness, grief, unbelief just to name a few of the emotions I felt while listening to this book.  I could not imagine what if would be like to have to undergo a mastectomy at such a young age.  I felt for Sarah as she related what she felt as she had to undergo the surgeries and treatments for this disease and then also to have to deal with others reactions to her diagnosis was horrible also.

I was inspired when she relayed the way that she met the family of Somali refugees and how she befriended them and helped them to navigate our culture and all the things that we take for granted she helped them to learn, like turning on the heat or turning on the oven or even using the bathroom.  Sarah's willingness to reach out and help these refuges has inspired me to be more willing to reach out and help those around me.

As the summary says above there is some adult language but it all was quite understandable in the context that it was used.

I thought that Kirsten Potter did an excellent job with the narration.

I recommend this book but I would suggest not listening to it around small children because of the language.

I received a review copy of this book in exchange for my honest opinion from Oasis Audio.
Posted by detweilermom at 1:49 PM