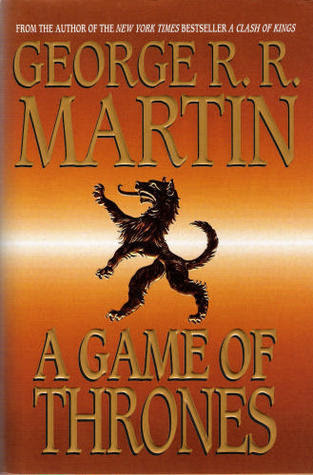 A Game of Thrones by George R. R. Martin
Narrated by Roy Dotrice

From Goodreads.com: The first volume of A Song of Ice and Fire, the greatest fantasy epic of the modern age. GAME OF THRONES is now a major TV series from HBO, starring Sean Bean.

Summers span decades. Winter can last a lifetime. And the struggle for the Iron Throne has begun.

As Warden of the north, Lord Eddard Stark counts it a curse when King Robert bestows on him the office of the Hand. His honour weighs him down at court where a true man does what he will, not what he must … and a dead enemy is a thing of beauty.

The old gods have no power in the south, Stark’s family is split and there is treachery at court. Worse, the vengeance-mad heir of the deposed Dragon King has grown to maturity in exile in the Free Cities. He claims the Iron Throne.

My Take:  First and foremost this is definitely not a book to listen to when children can hear. Alot of Adult material and violence.
The Story is very extensive and wide sweeping.  It is an interesting fantasy and has a great story.  The book grips you from the beginning and makes you keep listening for the entire 33 plus hours.  I did find it hard at times to follow some of the story as some of the names are very similar.

Narration:  I did find some of the voices for the characters a bit off but that maybe because I saw the tv show.  I did find the voice for Tyrrain Lannister very shrill and highly stereotypical.  I really didn't like it at all. I did get use to it after awhile.

This is quite a commitment of time as I said before at 33 hours but it is easy to pick up once you get use to the narrator and all the ins and outs of the characters.

This book was taken from my personal audio library.
Posted by detweilermom at 3:22 PM