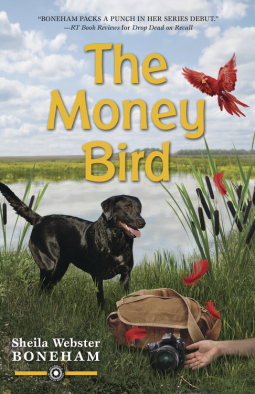 The Money Bird by Sheila Webster

From the Publisher
Animal photographer Janet MacPhail knows that trouble is in the air when Labrador Retriever Drake fetches a blood-soaked bag holding an exotic feather and a torn one-hundred-dollar bill during a photo shoot at Twisted Lake. One of Janet's photography students reports seeing a strange bird at the lake, but he turns up dead before Janet can talk to him. When she learns that the mysterious retreat center near the lake is housing large numbers of tropical birds, Janet is sure there's a connection and decides to investigate between dog-training classes, photo assignments, and visits to her mom at Shadetree Retirement. With help from her Australian Shepherd Jay and her quirky friend Goldie, Janet is determined to get to the bottom of things before another victim's wings are clipped for good.