With Hearts and Hymns and Voices by Pam Rhodes

It is time for a FIRST Wild Card Tour book review! If you wish to join the FIRST blog alliance, just click the button9in the sidebar). We are a group of reviewers who tour Christian books. A Wild Card post includes a brief bio of the author and a full chapter from each book toured. The reason it is called a FIRST Wild Card Tour is that you never know if the book will be fiction, non~fiction, for young, or for old...or for somewhere in between! Enjoy your free peek into the book!

With Hearts and Hymns and Voices

***Special thanks to Cat Hoort, Trade Marketing Manager for Kregel Publications, for sending me a review copy.***


Pam Rhodes has presented Songs of Praise—one of the world's leading religious television programs—since 1987. Prior to that she had been a journalist and TV news reporter. 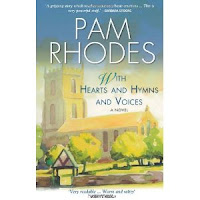 When the phone rang, she almost missed it. She was down in the cellar, digging out crepe paper supplies for the Sunday School youngsters, and although she heard it ring, Helen ignored it. Clive was in—let him get it.

By the time she realized he was ignoring it too, and she’d climbed over the cat basket and a line of wellington boots to clamber up the stairs, Helen was breathless as she grabbed the phone.

‘I’m not,’ said a woman’s voice, with a slightly musical lilt to it. Was it Scottish? ‘St. Michael’s Vicarage is what I’m after. Is the vicar there?’

‘Well, he should be,’ said Helen, craning her neck to peer into Clive’s study, ‘but apparently not. What time is it? He’s got a funeral at ten-thirty this morning—he’s probably gone over to the church. Can I help? I’m his wife.’

‘I’m sure you can. I’d like to fix a time to come and chat with him. I’m going to be down your way on Wednesday afternoon—I just wondered if he’s got any time free then?’

‘Well, I don’t know of anything booked for that afternoon, but that doesn’t mean a thing. I’ll get him to ring you back, if you like. Can I tell him who called?’

Helen tucked the receiver under her chin as she reached for the pen, attached with tape and string to the phone, and searched for a corner of paper that wasn’t already written on.

‘My name is Jan Harding. I’m the Producer of the BBC. I want to look into the possibility of doing a Songs of Praise from Sandford.’

Helen’s pen came to a halt in mid-air.

‘Can I leave my number, and perhaps your husband—it’s the Reverand Clive Linton, isn’t it?’

‘Do you think he could ring me later today? I’d like to get things moving.’

Helen seized the pen again, and scribbled down the number. ‘I’ll pass the message on. He’ll probably get back to you in an hour or so. Bye.’

Helen replaced the receiver, and stared at the phone. What an extraordinary call! Songs of Praise, here? Sleepy little Sandford. Population eight hundred, and shrinking? Sandford, on a road that probably went somewhere once, but no one could quite remember why. This was a backwater, a place seldom found except by accident—and for most of the locals, except perhaps the ones who wouldn’t mind a bit more B & B business, that was just fine.

Helen chuckled. Wait till Bunty heard! Think how she’d set up four committees just to organize the summer fete! Something like this would keep her happily harassed and indispensable for weeks!

That reminded her—the Parish Magazine. Bunty had already rung twice, first to remind, and then to demand, that Clive get his intro over to her by yesterday at the latest. This morning, he’d promised he would closet himself in the study first thing, and get it done.

What was the time? Helen glanced at her watch. Five to ten. Wherever was he?

Dear Clive—so well-meaning, so willing to offer, so often to disappoint. For a man whose life was structured by services and meetings, time seemed to have surprisingly little relevance. He just forgot. As his thoughts took him on to heady spiritual heights, the worldly business of getting on with the day simply faded from his mind. He never meant to let anyone down, or cause confusion. He hadn’t a hurtful bone in his body. He simply forgot. And what he forgot, Helen—good old reliable Helen—always remembered, and organized around him.

Helen reached for her coat, and glanced at her reflection in the hallstand mirror. Her cheeks were flushed. Simmering frustration always left her that way, and nowadays, it seemed to hear that frustration was all she ever felt where Clive was concerned. What an old grouch she was becoming! She gave herself a stern look in the mirror, grabbed the funeral service sheets Clive had probably meant to take with him, and dropped the key, as usual, into the black flowerpot before pulling the front door shut.

Had he been forgetful when she’d first met him, she wondered, as she walked toward the church? He probably was, but it hadn’t mattered then. At twenty-four, in his last year of a theology degree, Clive’s search for truth, and his certainty of answers in the Christian faith, made him a compelling, mesmerizing companion. She admired his clarity of thought, his passion, his vision. She found herself watching him, asking about him, wishing she knew him better. And even before he ever really noticed her among the gaggle of students who often hung around together, she was probably already a little in love with him.

It had been the Christian Fellowship that finally brought them together. He suggested they invite along a well-known evangelical minister to one of their meetings. She volunteered to write the letter, and do the publicity. He had chaired that meeting, and introduced the speaker. She had arranged the tickets, the chairs, and given the vote of thanks for the floor. A week later, he received a card thanking him for organizing such a stimulating and thoroughly enjoyable evening. She was rewarded by the warm glow of friendship in Clive’s eyes, a warmth that over the months, steadily grew into love.

Helen’s thoughts were jolted back, as she saw the comfortable, coated frame of Mrs. Hadlow waiting at the church door.

‘Oh, Mrs. Linton. I am glad to see you, dear. I didn’t bring my key, you see, because the vicar said he’d be here. Just thought I ought to spruce things up a bit, well, for poor John, of course. So sad. Never really knew him well, but he seemed nice. Lonely, I think, all by himself, since Maisie died. His heart must have been broken. I told George, I thought it must have been broken, he missed her so much. Poor John. It’s a real shock. We’ll miss him.’

Helen smiled to herself, as she turned the key in the lock. ‘It’s kind of you to both, Mrs. Hadlow. I’ll just come and switch the lights on, and light that fire in the vestry. I’m sure Clive will be over in a while.’

‘I’ve brought my own tin of polish with me,’ said Mrs. Hadlow as she eased herself through the door. ‘I never really think you get a proper shine from a spray. It’d doesn’t smell right. I popped up to take a look in John’s garden this morning, to see if his daffs were out. His always seemed to be the first, and I thought he might like his own flowers in church this morning. Too early, though—but he did love his garden! What ever’s going to happen to that garden now? Did he and Maisie have any family, do you know? My Rosemary, she did breakfast at The Bull this morning—well, it’s Thursday, so she always does—she said there’s a couple staying there, come for the funeral today. Do you think they’re relatives? Poor man, kept himself to himself. I never really knew him well.’

Helen headed back towards the door.

‘Oh, leave the door on the jar, would you, dear? Mrs. Murray said she’d pop over. Did you hear her leg’s bad again? Those pills really aren’t working. I keep telling her she ought to go back and ask, but you know how she hates making a fuss. Anyway, she’ll want to come and pay her respects. We all do, poor man.’ And as Mrs. Hadlow began a cheerful, tuneless hum, Helen slipped away.

So, Clive wasn’t at the church. She headed for the next most logical place…