Awakened by Grace by Darlene West

An encouraging story about love, loss, despair and the eternal optimism for a soul graced by faith…. 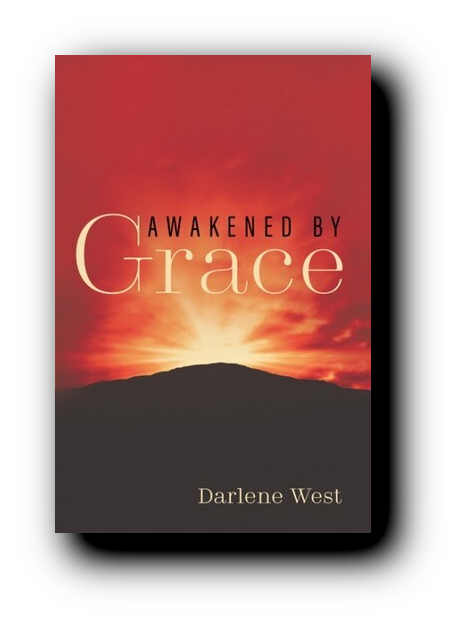 After the tragic death of his wife, Katie, Professor Franklin Franklyn blames himself. Filled with anguish, he walks away from his family and removes himself from all social interactions, which augments his suffering. But soon after the second anniversary of his wife’s death, his self-imposed reclusive lifestyle is interrupted by an unplanned visit from his eight-year-old granddaughter, Maggie. From that point on, Maggie’s faith-filled answered prayers manifest before Franklin’s eyes. As the two experience God-led divine appointments, Maggie encourages new people to become part of Franklin’s life. In spite of all Franklin witnesses, he finds it difficult to let go of his guilt and move on without his wife.

“Awakened by Grace is a touching story of a man whose wife was killed. . . . His granddaughter, Maggie, opens the heart of her grandfather and teaches him to look outward instead of inward. . . . It is a wonderful story of overcoming adversity.”

“You will love Awakened by Grace and never want it to end. If you’re looking for a book that portrays love, hope, forgiveness, and redemption, this is it. You can’t help but root for Maggie. Her faith is unending and her tenacity is infectious. I highly recommend you grab a cup of coffee and snuggle in for a good read. It will be hard to put down.”

“In my opinion, Darlene West’s book Awakened by Grace is very well-written and engaging. Through the trials of the characters in her book, I love how Darlene has used her faith in the Lord to illustrate how she believes that God can bring light to situations that are very dark.”

Professor Franklin Franklyn would have never been in church that night if it hadn’t been for his granddaughter’s Christmas play. He enjoyed spoiling his six-year-old princess, Maggie. When he and his wife, Katie, had arrived, the play had just begun.

At the entrance of the foyer, an older gentleman greeted them. Un­buckling her tan coat’s belt with one hand, Katie took the program from the greeter, and thanked him. Franklin proceeded to unbutton his winter coat as they dashed toward the coat rack.

Franklin helped his wife with her coat. “I hope we didn’t miss her dance.”

“I don’t think so.” She glanced at her gold watch, “We’re only seven minutes late. We didn’t miss it.”

As he shoved their coats into the packed cubby-space, Franklin felt someone bump his hip. He swiveled around. Looking around at his six-foot-four eye level, he didn’t see anyone. That is, until he felt another bump against his hip.

Next to him was a thin woman hunched over with her body wob­bling. Teetering, her red scarf swayed from her neck. Her red-furry hat covered most of her salt and pepper hair. Franklin leaned over a bit.

The woman was having difficulty. Her crooked fingers struggled to hang her coat on the hanger.

Franklin extended a hand toward her. “Young lady, may I help you with your coat?”

When she stood straight, she appeared shorter than he had per­ceived, but a bit taller than his petite wife.

“Young lady?” her broad smile exposed her large yellowish, crooked teeth. “I don’t have to guess that you’re a charmer. I am proud to say that I have eleven grand-children and five great-grandchildren, and one great-great-grandchild in the oven. I’m ninety-two years young.”

Other than a few aging lines under her eyes and around her full lips, the smoothness of her light beige skin presented a much younger woman. “Ninety-two! Impossible! You look like you’re in your fifties.”

“Your charm won’t get you anywhere with me, young man. But since you’re a kind gentleman, I’ll take you up on your offer.”

Katie assisted the woman with her scarf. “Mrs. McKinney, did you come alone?”

She must know the woman.

“Yes I did! I can drive myself though my family doesn’t think so.” She handed Katie her hat. “Timmy is narrating the play tonight.”

Katie touched her arm. “Mrs. McKinney, I’m sorry, I forgot to introduce you to my husband, Frank. Honey, I’d like you to meet Mrs. McKinney.”

“This is Frank?” She appeared as ecstatic as a child who had caught Santa Claus with his bag of toys.

Franklin shook her cold and frail hand. “It’s nice to meet you.”

“I’m so happy to meet you. I’ve been praying for you.”

Though he perceived prayer as a ridiculous ritual used to comfort religious people in times of need, he took no offense by her comment. Besides, he knew from experience that prayer neither helped nor hurt anyone.

“Katie, he’s tall like my darling Grant was. I can’t believe that it’s been three months since he went home to be with the Lord.”

A shiver jolted Franklin’s body. “Mrs. McKinney, I’m so very sorry.” He grabbed Katie’s hand. Just the thought of losing her disturbed him.

The corners of Mrs. McKinney’s lips turned upward. “Thank you. I know he’s with Jesus and I’ll see him soon, but I do miss him.” Her droop­ing eyelids contrasted the divine contentment written in her face.

“Granny!” a young-bubbly blond screeched, “There you are!” the long-legged teen wrapped her arm around Mrs. McKinney’s shoulders. “You should’ve let Daddy pick you up. We were worried about you.” 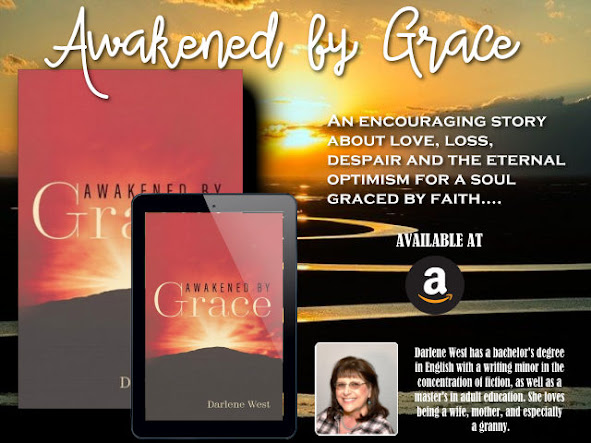 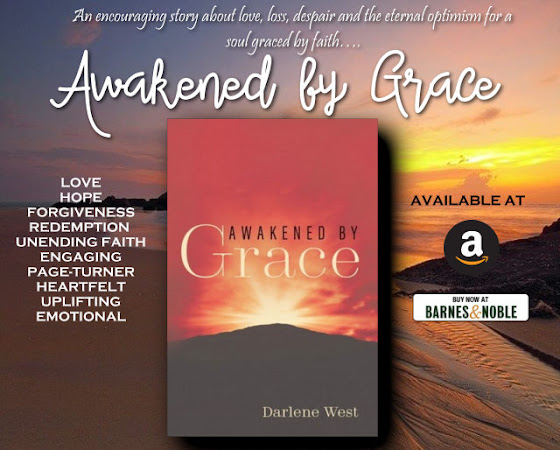 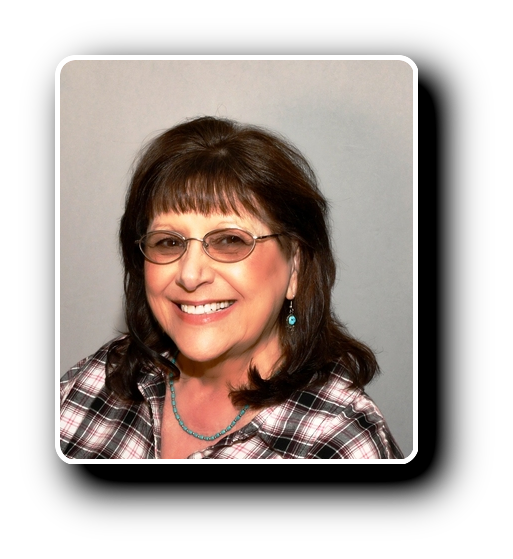 Darlene West has a bachelor’s degree in English with a writing minor in the concentration of fiction, as well as a master’s in adult education. Darlene is a retired corporate developer, program designer, evaluator, training needs assessor, and curriculum specialist. Though she grew up in and loved the restaurant business, her favorite regular job was being a Christian radio disc jockey in Champlain, New York. She loves being a wife, mother, and especially a granny. 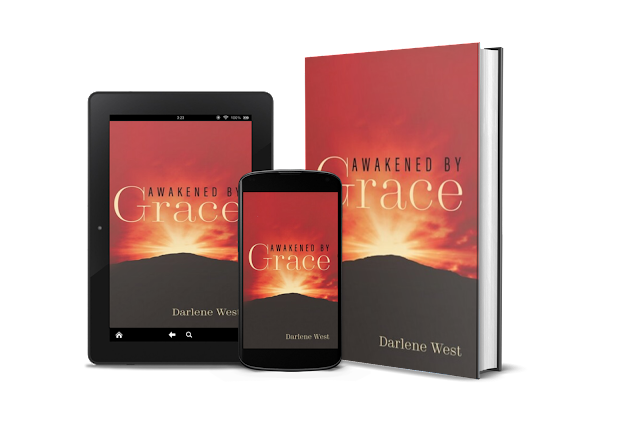 My Take: This is a very well written story that will pull at your heartstrings and maybe produce a tear or two. This is a story that deals with Grief and starting over in faith filled way that will touch you right in the feels and won't let go until the very end. Professor Franklyn feels alot of grief over his wife's death and is slowly going down hill until he has a visit from his granddaughter Maggie. Maggie has answeres to prayers and leads her Grandpa back to start a new life but he still has a way to go. I would highly recommend this book to everyone. I received a review copy of this book from Pump Up Your Book Tours and was not required to write a positive review.
Posted by detweilermom at 3:56 PM