Beyond the Headlines by R. G. Belsky 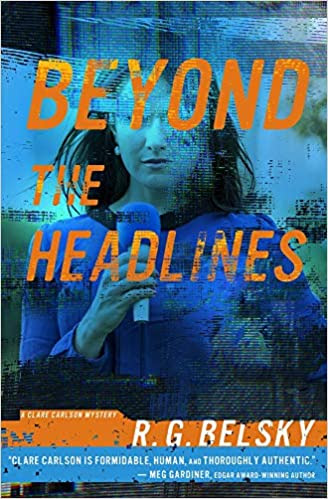 Laurie Bateman was living the American dream. Since her arrival as an infant in the U.S. after the fall of Saigon, the pretty Vietnamese girl had gone on to become a supermodel, a successful actress, and, finally, the wife of one of the country’s top corporate dealmakers. That dream has now turned into a nightmare when she is arrested for the murder of her wealthy husband.

New York City TV journalist Clare Carlson does an emotional jailhouse interview in which Bateman proclaims her innocence—and becomes a cause celebre for women’s rights groups around the country.

At first sympathetic, then increasingly suspicious of Laurie Bateman and her story, Clare delves into a baffling mystery which has roots extending back nearly fifty years to the height of the Vietnam War.

Soon, there are more murders, more victims, and more questions as Clare struggles against dire evil forces to break the biggest story of her life.

“Do you know who Laurie Bateman is?” my friend Janet Wood asked me.

“I do,” I said. “I also know who Lady Gaga is. And Angelina Jolie. And Ivanka Trump. I’m in the media, remember? That’s what we do in the media, we cover famous people. It’s a dirty job, but somebody’s gotta do it.”

We were sitting in my office at Channel 10 News, the TV station in New York City where I work as news director. I should have known something was going on as soon as Janet showed up there. We usually met at Janet’s law office which is big, with panoramic views of midtown Manhattan, and a lot nicer than mine.

Janet never comes to see me at Channel 10 unless she has a reason.

I figured I was about to find out that reason.

It was early December and outside it was snowing, the first real storm of the winter. The snow started falling during the night, and by now it was covering the city with a powdery white blanket. Pretty soon the car exhausts and trucks would turn it into brown slush, but for now it was gorgeous. From the window next to my desk, the city had an eerie, almost unreal quality. Like something from a Norman Rockwell painting.

My outfit for the day was perfect for the snowy weather, too. I’d walked in wearing a turtleneck sweater, heavy corduroy slacks, a blue down jacket with a parka hood and white earmuffs, scarf and mittens. The ski bunny look. I felt like I should have a cup of hot chocolate in my hand.

“Why does Laurie Bateman need you as an attorney?” I asked Janet.

She hesitated for what seemed to be an inordinately long amount of time before answering.

“Are we talking off the record here?”

“Whatever you want, Janet.”

“I need your word on that.”

“C’mon, it’s me. Clare Carlson, your best friend in the world.”

“Laurie Bateman wants me to represent her in divorce proceedings.”

“Is it too late to take back my ‘best friend in the world/ off-the-record’ promise?”

“How much do you know about Laurie Bateman?” she asked me now.

I knew as much as the rest of the world, I suppose. Laurie Bateman seemed to have the American Dream going for her. Since coming to the U.S. as a baby with her family after the fall of Saigon in 1975, the pretty Vietnamese girl had grown up to become a top model, then a successful actress, and finally, the wife of one of the country’s top corporate deal makers. She had a fancy Manhattan townhouse, a limousine at her beck and call and her face had graced the covers of magazines like Vogue and People.

Her husband was Charles Hollister, who had become incredibly wealthy back in the ’70s as one of the pioneers of the burgeoning computer age. He was a kind of Steve Jobs of those early days, and he later expanded into all sorts of other industries—from media to pharmaceuticals to oil drilling and a lot more. He was listed as one of the ten wealthiest businessmen in America.

When Hollister married Laurie Bateman a few years ago, there were a lot of jokes about the big difference in age between the two—she was so much younger and so beautiful. Like the jokes people made about Rupert Murdoch with Wendy Deng and then Jerry Hall, his last two wives. People always assume that a younger and pretty woman like that is marrying for the money. But Laurie Bateman and Charles Hollister insisted they were in love, and they had consistently projected the public persona of a happily married couple in the media since their wedding.

Except it now appeared they weren’t so happily married.

“Is she trying to divorce him to get her hands on his money?” I asked.

“Actually, he’s trying to divorce her and stop her from getting her hands on any of his money.”

“So the bottom line here is this divorce is about money.”

“Isn’t there a pre-nuptial agreement that would settle all this?”

“Yes, there is a pre-nup. But we don’t think it applies here. That’s because other factors in the marriage took place which could invalidate the terms of the pre-nup they agreed to and signed.”

“Such as?” I asked finally.

“For one thing, Charles Hollister has a mistress. A younger woman he’s been seeing.”

“Much younger. In her twenties.”

“Jeez! Hollister’s such an old man I have trouble imagining him being able to have sex with his wife, much less getting it up for a second woman on the side.”

“Her discovery that he was cheating on her, along with a lot of other reasons, have turned Laurie Bateman’s life into a nightmare—a living hell—behind the walls of the beautiful homes they live in. She’s kept quiet about it so far, protecting the happy couple image they’ve put on for the media. But now she wants to let the world know the truth. That’s where you come in, Clare.”

Aha, I thought to myself.

Now we’re getting down to it.

I was about to find out the real reason Janet was here.

“Laurie Bateman wants to go public with all this,” Janet said. “She wants to tell her story in the media. The true story of her marriage to Charles Hollister. We know Hollister is going to use his clout to try and smear her and make her look bad, so that’s why we want to get her version out quickly. What I’m talking about here is an exclusive interview with Laurie Bateman about all of this. Her talking about the divorce, the cheating—everything. And she wants you to do the interview with her.”

“Why not Gayle King? Or Savannah Guthrie? Or Barbara Walters or Katie Couric or Diane Sawyer or another big media name? I’m just the news director of a local TV station here.”

“She wants you, Clare. In fact, I think that’s the reason she hired me for her lawyer. She found out you and I were friends—and she’s hoping I can deliver you to her to do this interview on air with her.”

“I still don’t know why she wouldn’t want to go with someone really famous . . .”

“You’re famous too, Clare. You know that as well as I do. And that’s why she wants you. You’re as famous as any woman on the air right now.”

Janet was right about that.

It could have gone either way—I could have wound up being either famous or infamous because of what I did—but in the end I’d wound up as a media superstar all over again.

Just like I’d been when I won a Pulitzer Prize nearly twenty years ago for telling the story of legendary missing child Lucy Devlin—even though I didn’t tell the whole story then.

I still wasn’t sure how I felt about all this new found fame I’d gotten from my Lucy Devlin story, but there was no question that if it got me this Laurie Bateman story . . . well, that would be a huge exclusive for me and the station.

“When can I meet her?” I asked Janet. 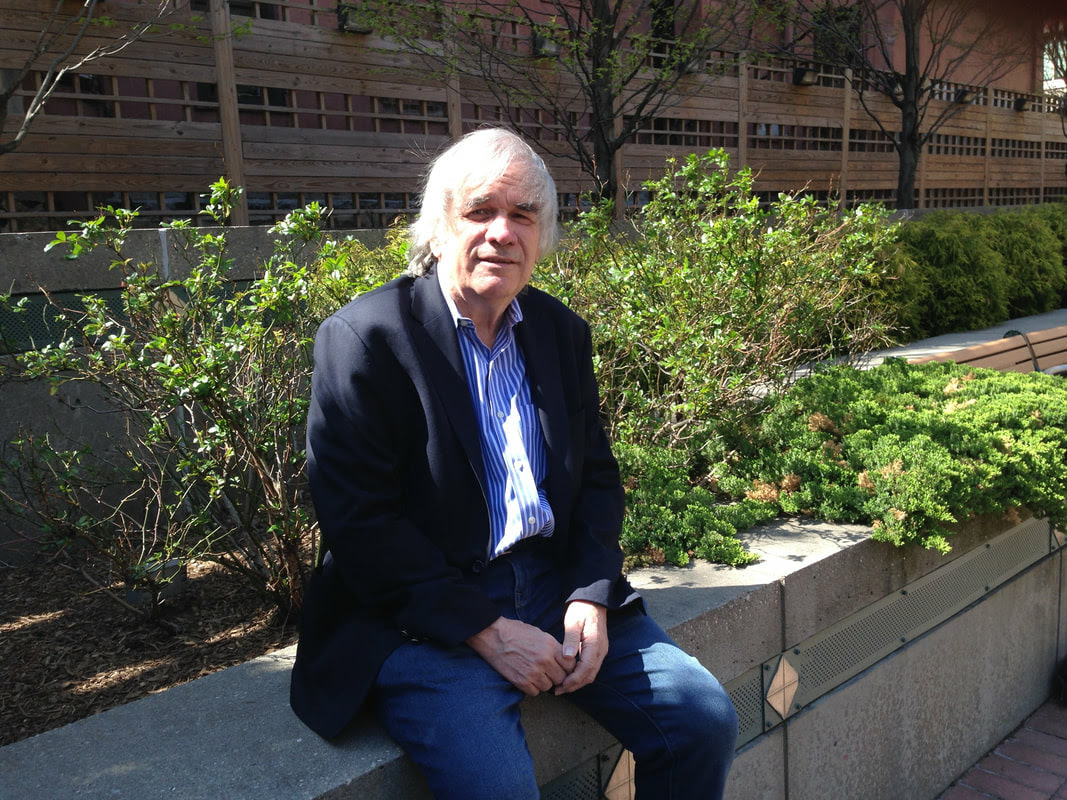 R. G. Belsky is an author of crime fiction and a journalist in New York City.

Belsky previously wrote the Gil Malloy series – THE KENNEDY CONNECTION, SHOOTING FOR THE STARS and BLONDE ICE – about a newspaper reporter at the New York Daily News.
Belsky himself is a former managing editor at the Daily News and writes about the media from an extensive background in newspapers, magazines and TV/digital news. He has also been a top editor at the New York Post, Star magazine and NBC News.

This is a rafflecopter giveaway hosted by Partners in Crime Virtual Book Tours for R.G. Belsky. There will be two (2) winners who will each receive one (1) Amazon.com Gift Card. The giveaway begins on May 1, 2021 and ends on June 1, 2021. Void where prohibited.

My Take: This is the fourth book in a series but you can read it as a stand alone. Laurie Bateman is a super model and actress who has been accused of murdering her wealthy husband. TV Director Clare Carlson has bee asked to give some air time to the case and then she decides to investigate herself. There are some twists and turns in the story and it keeps you turning the pages to find out what happens next. I will be looking to pick up more in this series. I would recommend this book if you like suspensful thrillers. I recieved a review copy of this book from Parthers in Crime Book tours and was not required to give a positive review.
Posted by detweilermom at 6:00 AM