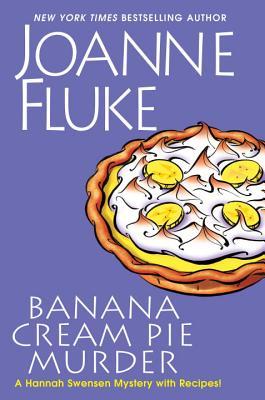 A romantic seven-day cruise is the perfect start to bakery owner Hannah Swensen’s marriage. However, with a murder mystery heating up in Lake Eden, Minnesota, it seems the newlywed’s homecoming won’t be as sweet as she anticipated . . .
After an extravagant honeymoon, Hannah’s eager to settle down in Lake Eden and turn domestic daydreams into reality. But when her mother’s neighbor is discovered murdered in the condo downstairs, reality becomes a nightmarish investigation. Victoria Bascomb, once a renowned stage actress, was active in the theater community during her brief appearance in town . . . and made throngs of enemies along the way. Did a random intruder murder the woman as police claim, or was a deadlier scheme at play? As Hannah peels through countless suspects and some new troubles of her own, solving this crime—and living to tell about it—might prove trickier than mixing up the ultimate banana cream pie . .

My Take:  I have read all of the Hannah Swenson Mysteries and have enjoyed all of them but this one wasn't as enjoyable as the others.  I don't know if it was because I really don't like Hannah's new husband.  He is just a blah character or if it was that the mystery was blah.  I really find it hard to concentrate on the mystery as I didn't feel that invested in the character who was murdered or in the crime itself.  I did figure out the murderer before the reveal.  Seemed as if most of the characters that I have enjoyed in the past were left out of this one.  Did end on a cliffhanger?  Maybe for next book.  I will continue the series.

I received a review copy from Amazon Vine in Exchange For my honest opinion.
Posted by detweilermom at 8:00 AM