The Legend of the Pumpkin Thief by Charles Day 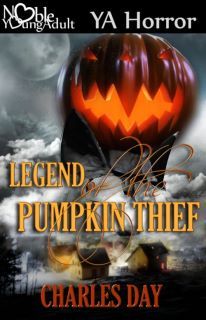 The Legend of the Pumpkin thief by Charles Day

As the townsfolk sleep, something creeps into the neighborhood. Hidden in shadows, its presence is as old as time itself, its intent not born of goodness.

Nick, a teenager who fancies himself a detective, wakes to find his carved masterpiece missing. Now a mystery is afoot, and Nick has his first assignment, to find out who or what is snatching up the town’s pumpkins and why.

Unfortunately, as with all great detectives, obstacles stand in Nick’s way—the neighborhood bully and his cronies, and the strange old lady and her dog who share the run-down house at the end of Nick’s block. As Nick investigates, an urban legend unravels . . . .

The Legend of The Pumpkin Thief.

Nick fears the legend as he embarks on the most dangerous adventure of his young life. Collecting clues, getting ever closer to the true nature of evil, he learns that curiosity comes with a high price.

My Take:  I don't know if I would label this a YA book maybe more of a middle grade.  I think most YA readers would consider this way beneath them.  I did find that looking at it from a middle grade level it was cute and a bit on the suspense/thriller level but not really scary.  I am a bit jaded though as I compare things to Stephen King to measure scary. But even from a middle grade level this might be a little on the mild side.  I would recommend that parents read it first just so you are sure that this would be ok for your Child.

I received a review copy of this book in exchange for my honest opinion.
Posted by detweilermom at 4:48 PM

Email ThisBlogThis!Share to TwitterShare to FacebookShare to Pinterest
Labels: Charles Day, The Legend of the Pumpkin Thief