The Chill of Night by James Hayman 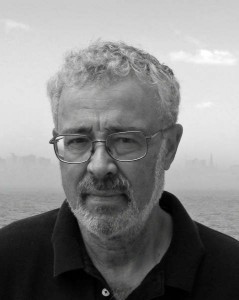 
Like McCabe, I’m a native New Yorker. He was born in the Bronx. I was born in Brooklyn. We both grew up in the city. He dropped out of NYU Film School and joined the NYPD, rising through the ranks to become the top homicide cop at the Midtown North Precinct. I graduated from Brown and joined a major New York ad agency, rising through the ranks to become creative director on accounts like the US Army, Procter & Gamble, and Lincoln/Mercury.

We both married beautiful brunettes. McCabe’s wife, Sandy dumped him to marry a rich investment banker who had “no interest in raising other people’s children.” My wife, Jeanne, though often given good reason to leave me in the lurch, has stuck it out through thick and thin and is still my wife. She is also my best friend, my most attentive reader and a perceptive critic.

Both McCabe and I eventually left New York for Portland, Maine. I arrived in August 2001, shortly before the 9/11 attacks, in search of the right place to begin a new career as a fiction writer. He came to town a year later, to escape a dark secret in his past and to find a safe place to raise his teenage daughter, Casey.

There are other similarities between us. We both love good Scotch whiskey, old movie trivia and the New York Giants. And we both live with and love women who are talented artists.

Visit James on the web at http://www.jameshaymanthrillers.com/.

About The Chill of Night 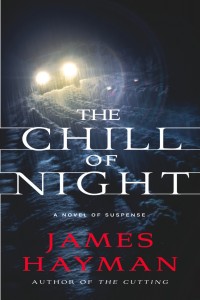 Some Crimes Can Never Be Forgiven.
Lainie Goff thought she had it all. The ambitious young attorney was brilliant, beautiful, and on a fast-track to a lucrative partnership at one of the top firms in New England. But then, one cold night, a dark and ugly secret comes back from Lainie’s past and she pushes things too far. Soon her body is found, frozen solid in sub-zero temperatures at the end of the Portland Fish Pier.

A mentally ill woman named Abby Quinn witnesses the brutal crime. But when she tells what she has seen, nobody will believe her. Not until she too mysteriously disappears.
In The Chill of Night, Portland homicide detective Michael McCabe finds himself finds himself fighting memories from his own past as he races to find the killer before another life is lost.

James Hayman once again tells a gripping tale of evil and deceit and creates characters so real and so human, we want to meet them again and again.

Read the Excerpt! (taken from Pump Up Your Book.com)

Abby looked up and saw a low dark thing moving toward her. A black form, now visible through the whipping snow, now obliterated by it. With each step it grew clearer and bigger. At twenty feet it began to take shape. Animal. Not human. A large dog, gray fur glistening under crystals of snow, cruel icy eyes shining through the night, more wolf than dog. She stopped but the animal kept coming. She could hear its rumbling growl. Low. Menacing. Commanding. Her heart beat against the walls of her chest so hard she was certain it would break through. She knew what the creature wanted. She knelt on her hands and knees. It bared a fang long enough and sharp enough to penetrate the soft flesh at back of her neck. She lowered her head and waited for release. But release didn’t come. Finally, after a minute or two, she looked up and it was gone. She could see nothing in front of her but the snow-covered street and the wind-swept flakes still hurtling down through the night sky. She stayed where she was, kneeling in the snow. She could hear a child crying. She listened. After a bit she realized the sound was coming from her. She got up and started walking again.

My Take:  This was a book that kept me wondering and and guessing the whole time.  A Great Mystery that had likable characters.  One of the main things I liked about the character Michael McCabe was that he was looking out for his daughter that he had to take care of when his wife left him.   The mystery behind Laine's murder was compelling and the search for the missing girl Abby was on the edge of your seat suspense.
Great Book!! I will be picking up The Cutting definately and will be looking for more books from James Hayman.

Posted by detweilermom at 9:10 AM

Email ThisBlogThis!Share to TwitterShare to FacebookShare to Pinterest
Labels: James Hayman, mystery, The Chill of Night