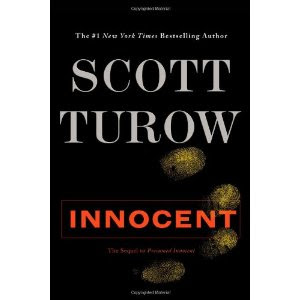 Jen over at Devourer of Books has declared this week as Audio Book Week.  She has dedicated certain topics to certain days.  Head on over to check it out.

I have saved a few of my audio reviews for this week.  As I state in this post I am an audio book junkie.  Unlike physical books though I can only listen to one book at a time.  I usually get through at least two books a month on audio depending on the length of the book.  When I am listening to Outlander it may take me two months to get through as I listen to another book after each section.

I received a copy of Innocent by Scott Turow on cds from Hatchett books for review purposes.

I had read Presumed Innocent when it came out about 20 years ago and I really liked the book.  I even liked the movie which is pretty rare as I usually don't think much of movies after I have read the book. So I was eager to listen to this sequel set some 20 years later, which by the way is about how long between books.
I was also eager to listen to Edward Hermann read this book.  For those of you who don't know who Edward Hermann is  he played Richard Gilmore, the Grandfather , on the Gilmore Girls.  There was also a female reader but as I have given my copy away and she isn't listed on the website I can't list her name ( I would be alittle put out about the whole not listed on the website thing if I was her).  She read the chapters that dealt with the female main character.

Well the book dealt with Rusty Sabich being looked into after his wife dies and he waits a full 24 hours before he informs anyone.  Just like Presumed Innocent there are plenty of twists and turns in this book to keep you listening and finding it hard to stop.

Imagine my surprise when I heard profanity coming out Richard Gilmore's, I mean Edward Hermann"s mouth.  It just didn't seem like the thing that he would say, to refined.  So that did take away from my enjoyment of this book.   Of course profanity usually takes away from my enjoyment nowadays as I feel that there has to be better ways for characters to express themselves.  I am not a prude but there is a point where is becomes excessive.  In this book it wasn't excessive but I did feel that it didn't need to be used quite as often.  I think that I am more sensitive to it when I hear it than when I read it. (Stepping off my soap box now).

So with everything considered I would give this book

(I have decided to use ladybugs as my rating system)

Posted by detweilermom at 10:00 AM