Keeping the Lights on for Ike by Rebecca Daniels 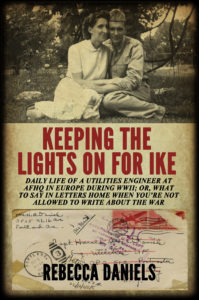 Description Keeping the Lights On for Ike by Rebecca Daniels

Daily Life of a Utilities Engineer at AFHQ in Europe During WWII; or, What to Say in Letters Home When You're Not Allowed to Write about the War Most people don’t realize that during the war in Europe in the 1940s, it took an average of six support soldiers to make the work of four combat soldiers possible. Most of what’s available in the literature tends toward combat narratives, and yet the support soldiers had complex and unique experiences as well. This book is based on personal correspondence, and it is primarily a memoir that creates a picture of the day-to-day realities of an individual soldier told in his own words [as much as he could tell under the wartime rules of censorship, that is] as well as giving insight into what it was actually like to be an American soldier during WWII. It explores the experiences of a non-combat Army utilities engineer working in a combat zone during the war in Europe and takes the protagonist from basic training through various overseas assignments—in this case to England, North Africa, and Italy as a support soldier under Eisenhower and his successors at Allied Force Headquarters. It also includes some reflections about his life after returning to Oregon when the war was over. The soldier involved is Captain Harold Alec Daniels [OSU, Class of 1939, ROTC] and most of the letters were written to his wife, Mary Daniels [attended U of O in the late 1930s]. They are the author's parents, and she inherited the letter collection, photos, and all other primary source materials after her mother’s death in 2006.

Praise Keeping the Lights On for Ike by Rebecca Daniels

“The book moves swiftly along, while at the same time capturing the frustration of their prolonged separation. The historical timeline provides just the right bit of historical context to these war years behind at the tail of the army. This is not the typical WWII combat book.”- The Montague Reporter “The lack of military detail — the focus on everyday life and on the relationship between Alec and Mary — ends up being one of the book’s greatest assets. Many works of history detail the story of great battles. Fewer dwell on individual wartime experiences.  The book is also strengthened by the affection expressed in Alec’s relatively inarticulate yet moving letters to his wife on the home front.”- Tinky Weisblat, Greenfield Recorder, author of “The Pudding Hollow Cookbook,” “Pulling Taffy,” and “Love, Laughter, and Rhubarb” “Carefully researched history and a beautiful remembrance of one soldier’s letters home. A poignant and personal look into the lives of two very private people and an extraordinary first hand example of why it’s called the Greatest Generation. In detail and in truly first class research one is left with the sense that they know these two people very well. Not only is this a well written historical account of World War II, it is a touching and gentle love story from a remarkable author with a most deft touch and turn. Got five stars from me. So worth it.”-W. Richards, Amazon “This book made me feel almost like I was right there with Alec and Mary as they experienced that time of their lives. My parents, being the same age, also had a similar experience and I thought of them as I read every word. The author cleverly brought to life their story and for that I shall be forever grateful.”- Sunbury Press Reader Review 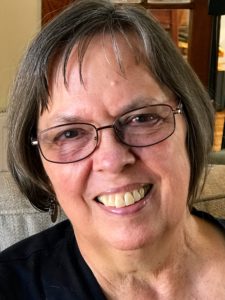 Rebecca Daniels has been a university professor for many years who has also simultaneously had a vital creative career in the theatre. Throughout her career, her work has always been a mix of performance, teaching, and her own writing. Her groundbreaking book on women directors and the effects of gender on their work is currently still in print [Women Stage Directors Speak: Exploring the Effects of Gender on Their Work, McFarland, 1996], and she has been published in several theatre-related professional journals over the years as well. After her retirement in the summer of 2015, she was finally able to focus all her energies on this book. Website:  https://rebecca-daniels.com/ Facebook: https://www.facebook.com/rebecca.daniels.9

Buy Keeping the Lights On for Ike by Rebecca Daniels

Giveaway Keeping the Lights On for Ike by Rebecca Daniels

This giveaway is for 1 print copy open to Canada and the U.S. only. There are also 2 pdf copies open worldwide. There will be 3 winners. This giveaway ends August 1, 2020,midnight pacific time. Entries are accepted via Rafflecopter only. a Rafflecopter giveaway

Follow Keeping the Lights On for Ike by Rebecca Daniels

Teddy Rose Book Reviews Plus June 12 Kick off & Excerpt Miller Amazon June 15 Review Lu Ann Rockin' Book Reviews June 16 Review & Guest Post Dino Goodreads June 17 Review Wes Goodreads June 18 Review Waqas  Goodreads June 19 Review Am Goodreads June 22 Reviewe Betty Toots Book Reviews June 23 Review & Interview Linda Lu Goodreads June 24 Review Jas International Book Promotion June 25 Review Bookgirl Goodreads June 26 Review Gud Reader Goodreads June 29 Review Amy Locks, Hooks and Books June 30 Review & Excerpt Michelle Reading Authors Network July 6 Dawn Bound 4 Escape July 10 Guest Review Dee Donadees Corner July 15 Review Teddy Rose Book Reviews Plus July 17 Review Kathleen Celticlady’s Reviews July 20 Guest Review  & Excerpt Amber Imaginative Mama's Dragonfly July 28 Review & Excerpt Mindy Room Without Books is Empty July 29 Review Danielle Urban Book Reviews July 31 Review & Guest Post My Take: I like reading books about World War II and it being actually what really happened just makes it even better. This book not only deals with the war but also deals with support troops who don't get the recognition that they deserve because they were supporting the troops, quietly working in the background so the fighting troops can do what they do. A lot of what Alec Daniels did he couldn't speak about because classified so he wrote about his thoughts and feelings about what he was doing. This is a great look behind the curtain so to speak. I would recommend. I received a review copy of this book from Virtual Author Book Tours and was not required to write a positive review.
Posted by detweilermom at 5:00 AM