Live To Tell By Lisa Gardner 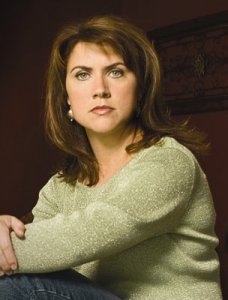 Lisa Gardner is the New York Times bestselling author of twelve novels. Her Detective D. D. Warren novels include The Neighbor, Hide, and Alone. Her FBI Profiler novels include Say Goodbye, Gone, The Killing Hour, The Next Accident, and The Third Victim. She lives with her family in New England, where she is at work on her next D. D. Warren novel, Save Me, which Bantam will publish in 2011.

You can find Lisa online at http://www.lisagardner.com/ 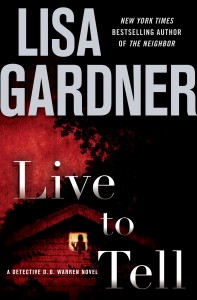 He knows everything about you—including the first place you’ll hide.

On a warm summer night in one of Boston’s working-class neighborhoods, an unthinkable crime has been committed: Four members of a family have been brutally murdered. The father—and possible suspect—now lies clinging to life in the ICU. Murder-suicide? Or something worse? Veteran police detective D. D. Warren is certain of only one thing: There’s more to this case than meets the eye.

Danielle Burton is a survivor, a dedicated nurse whose passion is to help children at a locked-down pediatric psych ward. But she remains haunted by a family tragedy that shattered her life nearly twenty-five years ago. The dark anniversary is approaching, and when D. D. Warren and her partner show up at the facility, Danielle immediately realizes: It has started again.

A devoted mother, Victoria Oliver has a hard time remembering what normalcy is like. But she will do anything to ensure that her troubled son has some semblance of a childhood. She will love him no matter what. Nurture him. Keep him safe. Protect him. Even when the threat comes from within her own house.

In New York Times bestselling author Lisa Gardner’s most compelling work of suspense to date, the lives of these three women unfold and connect in unexpected ways, as sins from the past emerge—and stunning secrets reveal just how tightly blood ties can bind. Sometimes the most devastating crimes are the ones closest to home.


Lisa Gardner’s LIVE TO TELL VIRTUAL BOOK TOUR AUG ‘10 will officially begin on August 2nd and end on August 27th. You can visit Lisa’s blog stops at http://www.virtualbooktours.wordpress.com during the month of August to find out more about this great book and talented author!

My Take: Someone is killing entire families with one thing in common.  They have children that have severe mental illness.  I found this book extremely riveting as the subject matter hit home a bit because I use to work at a children's home for children the physically and emotionally abused.  I have seen first hand how some children cope by physically striking out to both themselves and to others (I had to get stitches in two fingers after one such child slammed a door on my hand cutting my fingers and ripping off one of my fingernails).  I felt the anger that the Main character D.D. Warren felt at the murderer for targeting some of this societies weakest members.  Reading about these children was at times difficult  but I thought the author did a great job at not only bringing out the problems these type of children have but also making them people not just little monsters.  This was a great thriller and had my attention from the first page.
My only complaint about the book was the whole sexual talk between D.D. and Alex.  I am not a prude but I really didn't think that it was necessary. This didn't take up alot of the book though. Language was pretty raw at times.
Over All a great book.  I highly recommend it but definitely for mature readers only.

Posted by detweilermom at 8:23 AM