Book Spotlight of The Pirate Bride by Kathleen Y'Barbo 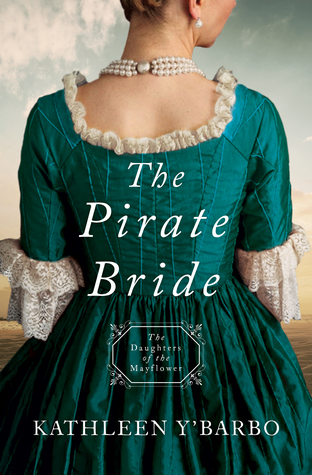 A Former Privateer and a Desperate Heiress Join Forces to Find a TreasureJump on board with a brand new series for fans of all things related to history, romance, adventure, faith, and family trees.One hundred years after her mother's family came to the New World on the Mayflower, Maribel Cordova has landed in New Orleans to seek the man who holds the key to finding her father’s lost treasure. Attorney Jean-Luc Valmot has buried his past life so deep that no living person will ever find it—or so he hopes as he accepts a position on the governor’s staff. But the daughter of an infamous pirate threatens all he holds dear. Can Maribel and Jean-Luc compromise so they both can hold onto what they most desire?Join the adventure as the Daughters of the Mayflower series continues with The Pirate Bride by Kathleen Y’Barbo.More to come in the Daughters of the Mayflower series:The Mayflower Bride by Kimberley Woodhouse – set 1620 Atlantic Ocean (coming February 2018)The Pirate Bride by Kathleen Y’Barbo – set 1725 New Orleans (coming April 2018)The Captured Bride by Michelle Griep – set 1760 during the French and Indian War (coming June 2018)The Patriot Bride by Kimberley Woodhouse – set 1774 Philadelphia (coming August 2018)​The Cumberland Bride by Shannon McNear – set 1794 on the Wilderness Road (coming October 2018)The Liberty Bride by MaryLu Tyndall – set 1814 Baltimore (coming December 2018)

Posted by detweilermom at 3:12 PM