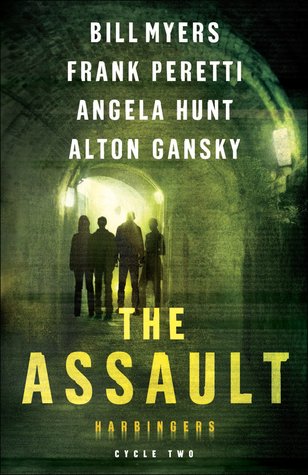 from Goodreads.com: he Next Wave of Stories in the Harbingers Series Arrives
Cycle 2 of the Harbingers series continues the story of four gifted strangers brought together to fight a growing darkness.
In Bill Myers's "The Revealing," the team finds themselves in Rome trying to retrieve the mystical spear Hitler once owned--the very spear that pierced Christ's side. This task will take them from hidden chambers inside the Vatican to a mysterious seaside cave with powers they could never expect.
Frank Peretti's "Infestation" unleashes a microscopic evil on the world that deceives, blinds, kills, then spreads. The Harbingers team must confront a monster bent on seducing and destroying mankind.
In "Infiltration" by Angela Hunt, the team is wounded and barely holding together. Forced to split up, they realize their investigations have led them into dangerous waters.
Alton Gansky's "The Fog" unleashes a supernatural mist unlike any other. There are vicious things in the fog that kill whatever they find. One team member realizes that the ultimate sacrifice may have to be made.

My Take:  I have read the first 4 books in this series but have not written a review for them yet.  I would suggest reading the first books as you will get to know the characters better and I think enjoy these stories more.  But these can be read separate.  I enjoyed these novellas very much maybe even alittle bet better than the first books.  Each story is meant to be read in one sitting and they all interconnect although each author has taken one of the main characters and chosen to write from that point of view.  I found the different adventures of this group of people very interesting and at the end of each of the stories I wondered what the team would be doing next.  The team consists of an aethist ex-priest, a street wise tatoo artist, the ex-priest's assistant and the only Christian in the bunch a big football player.  There is also a young boy who doesn't have stories told from his point of view.  I did find that the story The Fog was very reminiscient of Stephan King's "The Mist".

I received a review copy of this book from Bethany House in exchange for an honest review.
Posted by detweilermom at 3:11 PM