Sealed Up by Steve Dunn Hanson 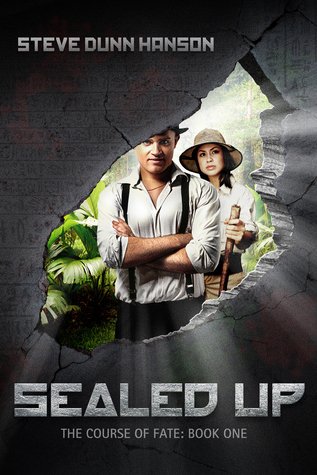 from Goodreads.com : The Da Vinci Code unsettles. SEALED UP shakes to the core!
UCLA anthropologist Nathan Hill, in a funk since his young wife’s death, learns of staggering millennia-old chronicles sealed up somewhere in a Mesoamerica cliff. This bombshell rocks him out of his gloom, and he leads a clandestine expedition to uncover them. What are they? Who put them there? No one knows. But, self-absorbed televangelist Brother Luke, who funds the expedition, thinks he does. If he’s right, his power-hunger will have off-the-charts gratification.Striking Audra Chang joins Nathan in his pursuit and brings her own shocking secret. As they struggle through an incredible jungle of puzzles and dead ends, she finds herself falling in love with Nathan. Her secret, though, may make that a non-starter.When a shaman with a thirst for human sacrifice, and a murderous Mexican drug lord with a mysterious connection to Brother Luke emerge, the expedition appears doomed. Yet Nathan is convinced that fate—or something—demands these inscrutable chronicles be unearthed.And if they are . . . what shattering disruption will they unleash?Intricately layered and remarkably researched, this enthralling suspense thriller begs a startling question: Could it happen?

My Take:  I found this book to be an ok book.  There were a lot of  Spanish words that were not translated so if you didn't speak Spanish you might be a little lost in places like I was.  I thought that the archeology theme was interesting as I have always been interested that you find out how people lived by what they left behind and what is in the ground in the rocks and soil.  I found the theme of founding of the Mormon church interesting.  I did feel like there was a climax toward the middle of the book and that the end of the book was a bit anticlimatic.  I see that this is a book one so maybe that was the reason.  I will be interested to read the next book and see what happens next.  I do hope that these characters come back.

I received a review copy of this book from Pump up your Book in exchange for my honest review.
Posted by detweilermom at 4:03 PM

Email ThisBlogThis!Share to TwitterShare to FacebookShare to Pinterest
Labels: pump up your book, Sealed up, Steve Dunn Hanson